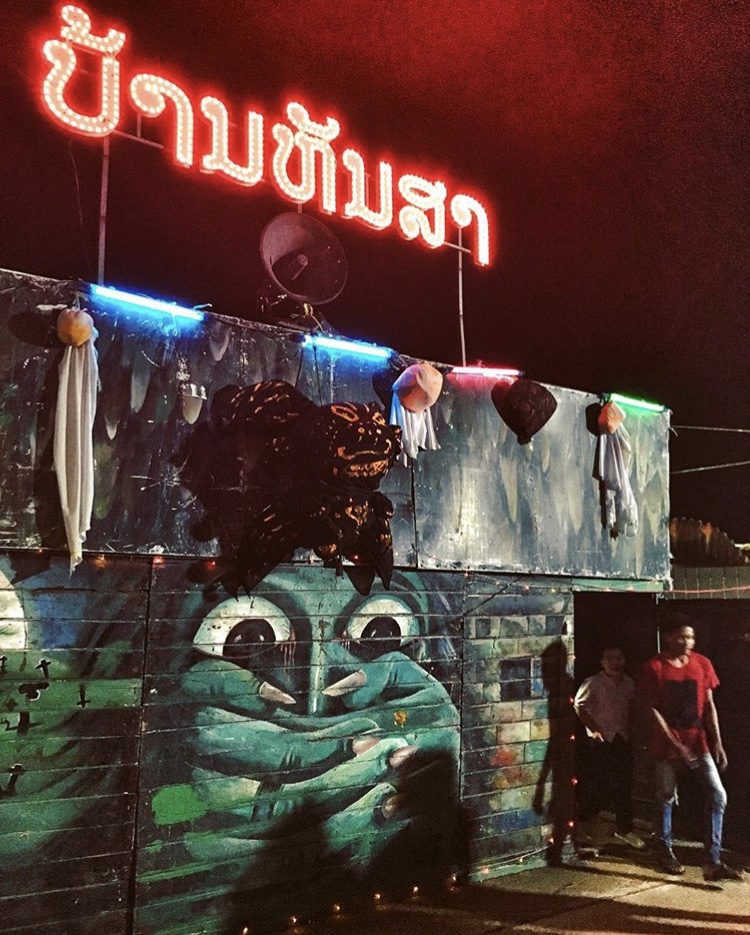 VIENTIANE, Laos – From the light-hearted to the macabre, ghosts and spirits have recently been visiting the area. Below are two must-see spots where the living may meet the dead.

After the revolution, believing in spirits was officially discouraged, but belief in them still remains strong. This year, the end of Buddhist Lent fell at nearly the same time as Halloween. In the carnival erected annually at Vientiane’s Boat Racing festival, there is a haunted house where youths dare each other to face the horrors inside. In Thailand, or America, this would be called a Ban Phi Sing or “Haunted House,” but bowing to official sentiments, it’s simply called Ban Hansaa or “Funhouse.”

Shifting focus to Thailand’s Isan region, one of the original Lao diaspora communities where people of Lao descent outnumber the current population of Laos by almost 400 percent, a shocking exhibition of underground resistance art is installed in a deserted building in Khon Kaen. Paintings, photography, installations, cinema and other media were used to help solidify a feeling of resistance against military dictatorship and the struggles with political justice.

This shocking piece takes two important elements from a famous photograph of the Thammasat University Massacre in 1976, where right-wing paramilitary forces attacked and killed dozens of student protesters in Bangkok. If you are brave enough, google the picture of a gleeful lynch mob looking on as a corpse is beaten with a folding chair, and it will all make more sense.