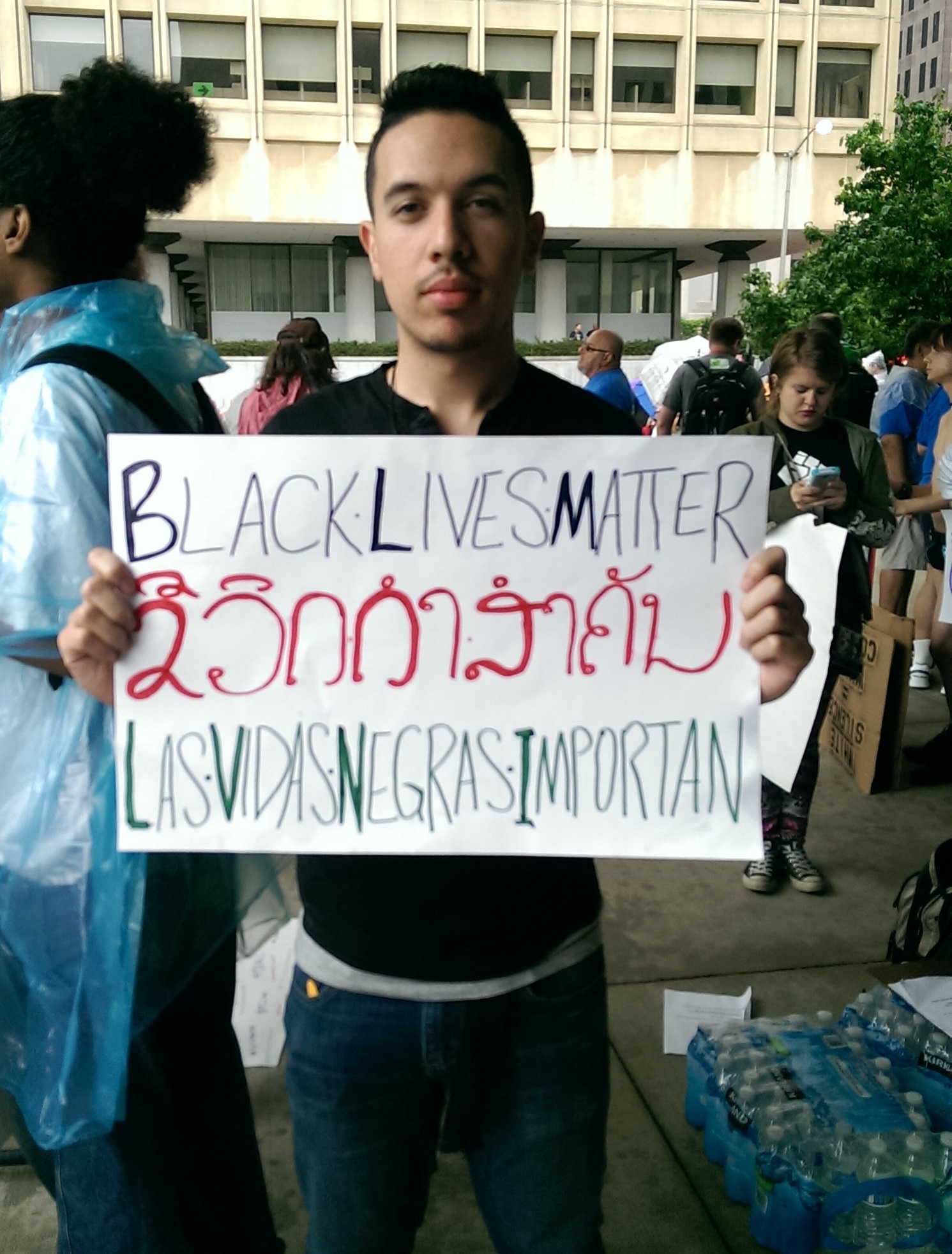 One of the most exciting parts about the National Lao American Writers Summit is meeting new and emerging voices in the Lao community in diaspora, and 2016 will be no different. Coming to visit San Diego in May will be emerging filmmaker, Timothy Singratsomboune, from Ohio. We caught up with him to discuss his latest film project, “All the Way Down,” and his approach to social justice, community building and love of all things Lao.

How did you develop an interest in the arts? What’s your family’s story in coming to America that stays with you the most?

I’m Timothy Singratsomboune, a 24-year-old, half Lao, half white, bisexual Ohio State graduate. I’m also a racial justice activist with the Cbus2Ferguson movement – who’s heavily invested in Black and other minority liberation. I’m also excited to share my upcoming film “All the Way Down” with everyone.

I’ve always been interested in telling my stories, which I feel are woefully underrepresented in any media, mainstream or indie. As the youngest of 4 siblings and a Scorpio, I don’t do well with being ignored. So, I use my art – narrative and screenwriting – to break the silence that I feel surrounds me.

My father is a refugee from a wealthy family in Champasak, and he still harbors resentment for the life he feels that the wars in Southeast Asia robbed him of. This fact reminds me constantly that no matter how many cards are stacked against me, the pain of not chasing my dreams will be far more crushing.

My favorite Lao food used to be sai oua, I could eat it 24/7 with sticky rice. But I’m cutting down on pork, so it’s now tom kha gai.

Creating new work is like going on a first date. There’s so much to learn and so much unpredictability to keep you excited. The biggest challenge is actually getting my excitement written or documented, because I get so lost in the world of my head that the stories grow too big to write down.

What’s a skill you picked up that was useful in your art?

I’ve been a labor and racial justice activist since I was a freshman at Ohio State. I was even a full-time organizer with a labor union here in Columbus. My organizing experience gave me the skills to move apathetic and unengaged people to action; which is what I want my artwork to do.

What keeps you motivated?

My biggest motivation, AND my biggest worry, is that I seem to be tackling the world of art and film alone. Though it is a burden to feel isolated as a queer, Laotian American, and ANGRY artist… the thought that my art might inspire younger kids like me is what keeps me grinding.

What’s something you might change about the understanding of our
culture? What’s a value you preserve?

I often times worry that Lao people use our belief in karma to downplay the necessity for social justice engagement. Our karma is something to work within or work around, not to be crushed under.

On the other hand, I really want Lao people to preserve their relaxed attitude toward life. The Western concept of “work ethic” really wears people down – forcing them to regret past failures and to fixate on future successes. I feel that Lao culture traditionally appreciates being in the present, and I am a big fan of this mindfulness.

What are some of the ways we might create more space for diverse
voices in the Lao community?

Unlike California or Minnesota, Ohio doesn’t have the biggest Lao community. Unfortunately, this means that the small number of disputes or family feuds in the community here has had an enormous effect, because there are just so few of us. To make room for diverse voices, we first need to rebuild a sense of existence for the Lao community here. Because, just like with EVERY social movement, the “diverse” voices – queer, trans, women, poor people, off-beats artists – will be the one’s leading the change. We just need people to feel empowered to create events and artwork that remind Lao people that a community can exists, and hopefully my films can do this.

If you could film anywhere in the world, where would you go?

Of course Wat Phou in Laos and Wat Arun in Thailand are high on the list, but my dream is to really have access to film anywhere in Columbus so that I can fully show my life experience growing up here.

What’s an important rule for you in the creative process?

It’s got to hurt. As wild as this sounds, I feel that if my art doesn’t make me feel vulnerable, then I didn’t really give it my all.

With my co-creator and dear friend Rashida Davison, I want to tour the country screening “All the Way Down”. We already have tentative events in Chicago, San Diego, Los Angeles, and Cleveland underway. Other than that, I just plan on making a stockpile of short films here in Columbus. And hopefully throw some Black and other minority liberation marches into the mix too.

Want to share your story? Tell us about it.