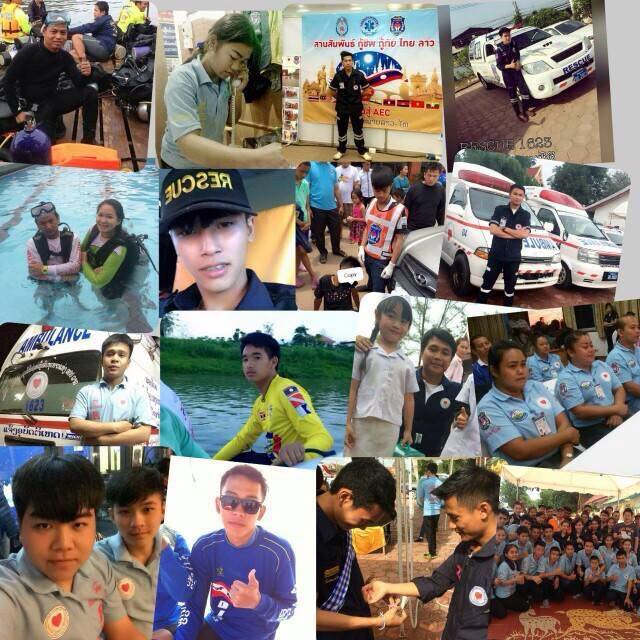 “Saviors of the street”, they’re appropriately nicknamed. In the increasingly crowded capital of Vientiane, emergencies happen often and while Americans take just 10 minutes for granted, imagine having to wait an hour or more before help arrived.

Vientiane Rescue Co-founder, Sebastien Perret, remembers the first time he witnessed a horrific accident in Vientiane that changed his life forever. “Although I used to be an EMT in France, I’ve never been confronted with such a bloodbath”, said Perret. After witnessing a motorbike with two men smashed against the pavement by a car who hit-and-run, they were left for dead on the road, with bystanders unresponsive by fear, despite being only 200 meters away from a hospital. That’s when Perret decided to start Vientiane Rescue, the only 24/7 free emergency service in the capital.

Vientiane Rescue responds to an estimated 19 accidents daily. From the last public report in 2013, Laos tracked that there were around 1,000 accidents with over 900 deaths that year. That’s from registered vehicles alone, without any figures from the hospitals on injuries and unreported deaths. In comparison, the state of Minnesota, which has a similar population size of 6 million people, which reported only 361 deaths in 2014. It’s no surprise that Laos has one of the worst rates of traffic-related deaths in the Southeast Asian region.

“I would say that 5 to 10% of the people we rescue on the road are dead already, or will die within hours/days at the hospital. When you ask people around you in Vientiane, all of them lost friends or relatives in deadly accidents”, says Sebastien.

Almost 80% of motorcycles dominate the roads in Vientiane and around 20% make up cars, trucks and buses as preferred modes of transportation. There’s no typical day at Vientiane Rescue. It starts with volunteers working both the day and grave shifts, and getting EMT training plugged in when available. Hundreds of lives have been saved because of this volunteer service run by local Lao emergency respondents. Perret is passionate about why the need for Vientiane Rescue must continue.

What is Vientiane Rescue and how did it get started?

A Lao foundation called Foundation for Assisting Poor People of Lao PDR got a donation in 2010, which was a brand new ambulance. With a handful of volunteers I’ve just met at that time, we decided to create a rescue branch under this foundation, called Vientiane Rescue, and immediately launched a 24/7 free service. We were seven volunteers at the beginning, including 5 young people who were only 15-years-old. At the very beginning, it was really hard, and we were everything but an ambulance service. We always arrived too late, under skilled, without adequate first aid equipment and sometimes with an empty tank. Little by little, I started to improve my Lao vocabulary and gave proper first aid training to the team. We got donations for gas, equipment, and help for us started to arrive. Today, we have 200 volunteers across 4 offices in Vientiane to be able to get to the place of accident within 3-7 minutes.

Tell us how emergency services in Laos works.

There’s only one official emergency service in Vientiane: the fire department. Fire fighters usually arrive to fires 40 minutes after the start of the fire, while we can get there in less than 10 minutes. This is a way for us to make a difference.

For fires, people help each other. But for road accidents, people just watch and usually wait for us to come. There’s no first aid knowledge among the population that could be seen as a public health issue. I think people are scared to do it wrong.

At first, our service was supposed to be just an ambulance service. It didn’t really make any sense to start scuba diving, fire and animal rescue. But as the population of Vientiane started to hear about our unique dedicated and free service, they started to call us for any kind of life threatening situation. We now are a “I don’t know what to do” service. When people are in dismay, they just call us. And our image is our only level of wealth. We can’t afford to miss one emergency, because people trust us. We have to be able to answer to any kind of emergency.

What has changed since Vientiane Rescue entered the scene?

We started by sleeping on the sidewalk on our night shifts, with one or two volunteers in the vehicle, without proper equipment or training. Today, our volunteers get the best training and equipment, we have the first scuba diving and hydraulic rescue teams. Vientiane is fully supportive. We have advertisements and documentaries in Thai TV and local TV, so people are used to our uniforms and faces.

People start to respect our work and recognize it. We want Lao people to understand that our service is only staffed with locals. There’s no foreigners, no international organizations and no institutions behind us. It’s just locals for locals. We want to show them that it is possible to be different, to see others as part of a same family, a human being family, and to care about each other. The atmosphere in this capital city is changing. We’ve been invited to the first ASEAN disaster games in Thailand a couple of months ago. We brought back a gold medal from there!

How does Vientiane Rescue plan to keep up?

These days are especially tough. We are growing very fast, get more vehicles and volunteers, while the support we get is only coming from individuals and a few small businesses. Despite the lack of funding, we recently bought a brand new minivan that we had transformed into the first EMS (Emergency Medical Service) ambulance in the history of this country. So we now have debt to pay off every 3 months. That sounds like a suicide. But it’s not. Because we are confident and full of hope. We already witnessed so many lives lost because of the lack of equipment, the violence of accidents and the lack of helmet wearing. So every time there’s an opportunity for us to get more equipment, training or vehicle, we take it. And when the end of the month is coming, if we don’t have any more gas, our volunteers empty their own pockets.

When asked about how Sebastien sees the future of Laos’ emergency services changing, he makes the case, “we are changing the negative image that foreigners and locals have of this city into an image of compassion, empathy, respect, dedication and love. Things are changing, but this is going to take time. It would take a generation to change.”

With only $2,571 raised out of the $127,250 fundraising goal, Vientiane Rescue is running an IndieGoGo campaign to continue their life-saving work. To contribute, go here.

To learn more about Vientiane Rescue:

Watch “Saviors of the Street” documentary on Al Jazeera or on Youtube: