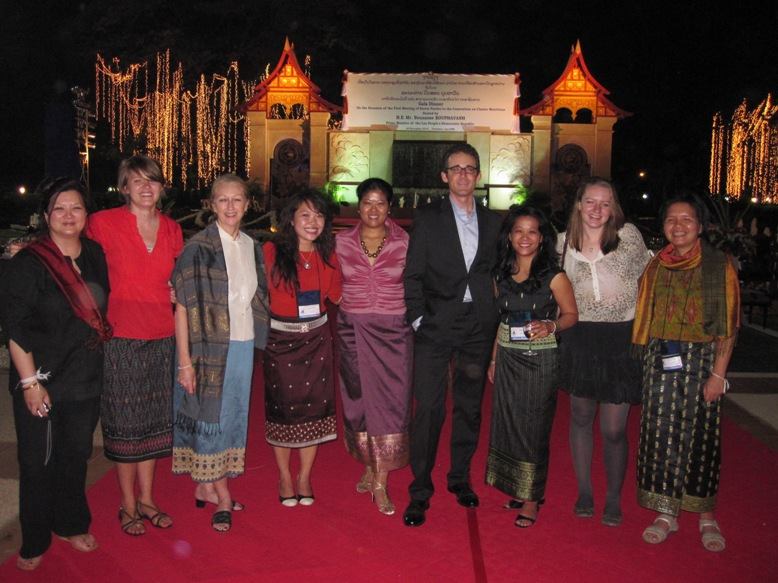 In 2010, I was part of a delegation from Legacies of War that joined 1,200 other participants in Vientiane to attend the first meeting of States Parties to the Convention on Cluster Munitions. It was the most significant international disarmament agreement in decades and it was unexpected – that this dynamic and fast-moving international process, initiated in Norway, and negotiated in Peru, Austria, New Zealand, Ireland and Uganda – would enter the important phase of implementation in Laos. On the one hand, it made perfect sense. Laos was the most affected country per capita by cluster munitions, but on the other hand, Laos was one of the smallest state parties to join the convention, and historically did not play a key role on the world stage. But under the bold leadership of Mr. Saleumxay Kommasith, of the Lao PDR Ministry of Foreign Affairs, and with support from other governments and civil society members of the Cluster Munitions Coalition, Laos had the honor of hosting the historic gathering.

As I joined in the celebration with other members of the Legacies of War delegation, including Brett Dakin, Elaine Russell, Cynthia Nguyen, Fred Branfman, Bangbay Siboliban, Chanida Phaengdara Potter, Titus Peachey, Lisa Knowlain, Pon Khamvongsa, Ova Saopeng and Heather Hammel, we were optimistic that the focus on clusters and the spotlight on Laos would help to spark the action needed to increase support for the fledgling unexploded ordnance (UXO) sector in the country. The Convention prohibits all use, production, transfer and stockpiling of cluster munitions. For affected countries like Laos, it establishes a framework for cooperation and assistance to ensure adequate care and rehabilitation to survivors and their communities, clearance of contaminated areas, risk reduction education and destruction of stockpiles.

That same year, Legacies of War’s advocacy yielded a huge victory. The U.S. increased funding to the UXO sector in Laos from $3M to $5M. The uptick in funding came 16 years after initial U.S. support towards the efforts of Titus Peachey, who worked with the Mennonite Central Committee and the Mines Advisory Group, to bring the first formal demining program to Laos. Up until 1994, villagers, mostly farmers, were left with the dangerous task of removing the bombs as they came across them. But the 2010 increase represented a shift  and an historic high in U.S. funding for Laos. It was a watershed moment for all the progress that would follow.

In 2008, I remember asking a U.S. State Department official why the demining funding to Laos was so abysmal. It had been between $1M and $2M for decades. His reply was blunt, “No one’s ever asked!” We were shocked, but equally encouraged. What if we asked more questions? Would people finally care? Would more be done to save lives in Laos? We got our answers; in form of greater public support and eventually increased U.S. government attention and funding. This meant more land cleared, lives saved and support for victims in Laos. 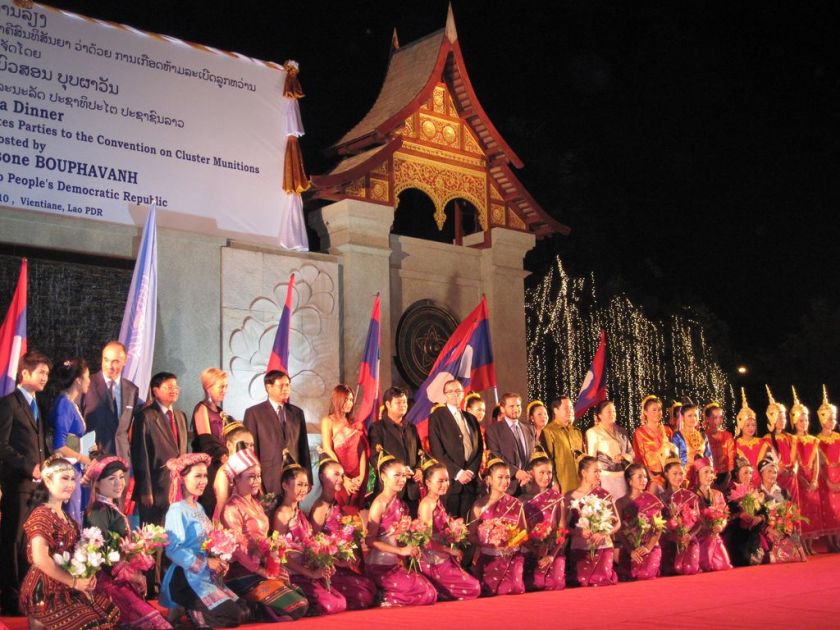 On the 5th Anniversary of the Convention, it is hard to imagine that the problem of UXO in Laos once received barely any attention, considering today’s growing awareness by policy makers and the media around the world. Especially in the U.S., where the expanded attention is evident by the five-fold increase in funding for demining assistance in Laos, from $3M to $15M, over the last five years. Between 1993-2014, U.S. funding to clean up these weapons totaled $84 million, of which nearly half came in the last 5 years as a direct result of our sustained advocacy.  Legacies of War receives none of this funding. This funding goes to groups working on the ground, such as MAG, HALO Trust, Sterling International, World Education, Norwegian People’s Aid, Handicap International and Spirit of Soccer.

It was not so long ago, when the people of Laos and the devastation caused by the millions of unexploded bombs, were not on the radar of U.S. policy makers. Our work is not done – dozens of people are still killed annually, 40% of whom are children and less than one-percent of the remaining unexploded bombs have been cleared.

We recognize the progress we’ve made thus far, and hold every milestone in high regard. We know that overcoming the “secret” of what has been done to the people in Laos has been a long fought journey. The struggle to be heard, to be seen, and not forgotten, is full of heartache. But this hard road we’ve traveled makes us acutely aware of the courage, humility, and grace that have led to the remarkable transformation in the hearts and minds of so many.

Along the way, we lost one of our dearest friends last year, Fred Branfman, who played a pivotal role in exposing the secret bombing of Laos in the 1960s and 70s that ultimately led to the end of the bombing in 1973. He left behind an indelible legacy and I’m so happy he lived to see the implementation of the Convention.
Hillary Clinton became the first U.S. Secretary of State to visit Laos after nearly 60 years and she met with many of the individuals and institutions working to help those hardest hit by the legacy of UXO, including the COPE Visitor Centre.We saw many folks engaging in grassroots efforts to address UXO clearance, from holding film festivals and art exhibits to commissioning bracelets made from UXO in an effort to “buy back the bombs” in a form of restorative justice. From California to Minnesota, Washington State, Oregon, New York and many states in between, more people were awakened by this history and took action to make a difference.

We’ve gotten many wonderful inquiries in light of recent coverage in articles such as National Geographic and the New York Times. We appreciate the way people want to make time for this issue. For those of you who are interested in helping on UXO clearance, you can.

Today, over 117 countries have joined the Convention on Cluster Munitions. “It always seems impossible until it is done,” Nelson Mandela once said. Although we are far from the finish line, today’s heightened level of awareness and cooperation in addressing the UXO problem in Laos was unimaginable just five years ago.

Little by little, step by step, we’ve gotten closer to a Laos safe from bombs, and making the world one of boundless futures. That’s a meaningful legacy, and we couldn’t have gotten this far without you. We look forward to finishing this journey together.

EVENT: If you’re in Seattle this Thursday, August 27th from 7:00-8:30pm, join Channapha and Legacies of War for a talk at Seattle’s ArtXchange Gallery. 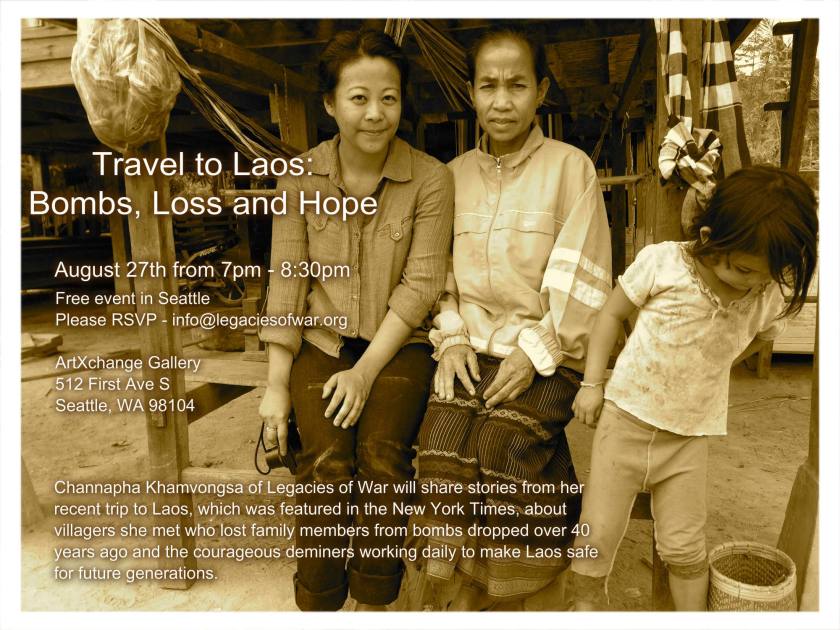 Channapha Khamvongsa is executive director of Legacies of War, an advocacy organization which seeks to address the problem of unexploded cluster bombs in Laos, to provide space for healing the wounds of war and to create greater hope for a future of peace.

To submit an op-ed, email editor@littlelaos.org.