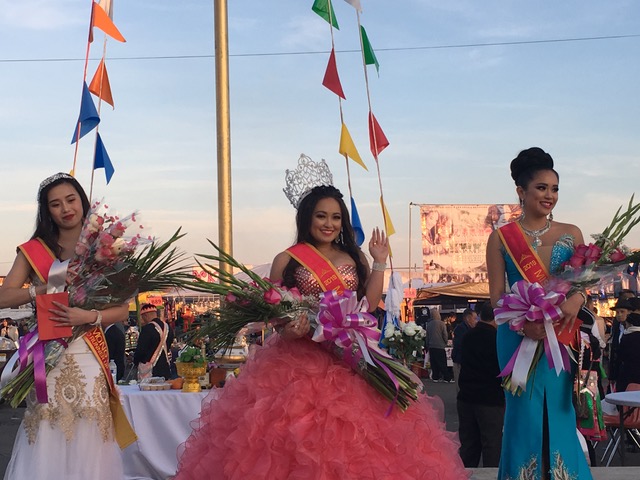 The meanings and purposes of Hmong American pageantry have changed but still embody old standards of beauty, poise and mannerism. When contestant Christina Xiong came on stage to participate in the singing competition at the 2017 Hmong New Year festival in Fresno, California, people on social media immediately ridiculed her for her lack of “singing abilities.” This year, she participated in the Fresno Hmong pageant as one of nine Hmong American women from across the country. The women competed for the Hmong Cultural New Year Celebration, Inc‘s Miss Hmong USA crown.

Growing up, I never thought the pageant held much honor and credibility other than as a means of entertainment for the new year festival. The winners greet guests at community events and ask for donations to buy pencils and books for youths. Giving things away seems to be the end game in serving the Hmong community. I have never been a pageant contestant and will never be initiated into the pageant sisterhood (“pageant sister” is a common term widely used among contestants). I’ve never sent in my application to be a pageant judge because I don’t look up to the pageant winners as role models just for winning.

I viewed and understood the pageant the way that Gee Xiong, a former student at California State University, Fresno, wrote in her master’s thesis, “Ntxhais Nkauj Ntsuab: A Study on the Miss Hmong Pageants in America,” as “for entertainment purposes to supplement the urbanized glamour of Long Cheng; however, and notably, the pageant reflected the evolving atmosphere of the Hmong community in Long Cheng.”

Ntxhais Nkauj Ntsuab is the name used for the pageant. According to Gee’s research, the name derived from the Hmong folktale of “Ngao Njua and Shee Na: The Story of the Plain of Jars.” In summary, Ngao Njua (Nkauj Ntsuab) was an incredibly beautiful woman who was taken by the king. Her husband, Shee Na, conjured a plan to trick the king, which resulted in the ruler’s death. This made the husband and wife fugitives, running from one village to another, creating the path that is the Plain of Jars in Xieng Khouang Province in Laos.

The first Hmong pageant winner, Maiv Yeev Lauj, was crowned at Long Cheng military base located in the Xieng Khouang Province in 1968 (Xiong, G., 2013). This win was just months after the assault by North Vietnamese and Pathet Lao forces on the American Central Intelligence Agency’s secret airbase, Lima Site 85, which resulted in the death of many Hmong soldiers. In a time of political turbulence, it is not unusual that women play a role in entertaining soldiers, as wartime leisure and entertainment have always been crucial in keeping morale high among soldiers in the 20th century.

“The contestants would walk on a stage in front of the judges, who were high ranking military officials, and ‘nuv’ or essentially greet the judges in a polite fashion…” Gee wrote. “The pageant took place prior to the Hmong New Year because the winner was expected to accompany the military officials to various New Year celebrations.”

So when did the pageant become a women empowerment medium? In the almost 45 years of the Hmong American diaspora in the west, the purpose of the pageant has shifted from being about beauty to empowerment.

“When we get to see these Hmong women wear our clothes and are very proud to wear them on stage, it’s a bigger meaning than just the beauty, talent or a competition for exploiting Hmong women.”

In recent years, Hmong American women have achieved higher standards of academic, career and financial independence compared to our mothers and grandmothers from the generation who migrated to the United States. This means the purpose of the pageant must reflect or try to align with the changing roles and interests of Hmong American women. Unlike the pageantry days of the 90s, today’s pageants include contestants from diverse backgrounds, many of whom are college-educated and beyond their 20s.

Mee Vang, a board member of the Minnesota Hmong New Year committee, said Hmong pageants are more than just about looks and abilities.

“When we look at Hmong pageants, I think a lot of people are passionate about it because these women are the ones promoting Hmong culture,” Mee said. “We are living in diaspora. There isn’t a lot written about the Hmong history and the Hmong culture. Everything we learn is from our parents’ experiences and our relatives’ experiences in Laos so when we get to see these Hmong women wear our clothes and are very proud to wear them on stage, it’s a bigger meaning than just the beauty, talent or a competition for exploiting Hmong women.”

Now, Mee said, the role of pageantry has transformed to help develop contestants into well-rounded leaders in their communities. She said the experience of training for the pageant could help contestants build up courage to look deeper within themselves, which could translate to courage in leading different opportunities and as role models.

“We are talking about empowering Hmong women,” she said. “We look at building leadership with the leadership with this pageant. The Minnesota Hmong New Year committee came up with these opportunities for the Hmong pageants. We really want them to incorporate how these Hmong women continue to lead in their community services during their royal court or even before getting on, when they come to practice, they build that leadership, which is bigger than taking that crown.”

On the other hand, a 2013 opinion piece by Tiffany Vang of Minnesota questioned the notion of the pageant as a platform to learn leadership skills.

“You may gain confidence, public speaking skills, and networking from joining the pageant, but why can’t you gain that somewhere else?” Tiffany wrote. “If you want to learn any of these skills or have these experiences, your first choice wouldn’t be a pageant would it? So why do people join pageants? I am unsure, but I will assume that it is because it’s glamorous, you get to dress up, and challenge your stage fright? I firmly believe that confidence comes from taking risks, following your moral compass regardless what people think, and holding yourself accountable for your mistakes and failures. It will take longer than a pageant to gain true confidence.”

The pageant shouldn’t be the only medium for Hmong women to learn leadership skills and gain confidence, but it is for some. It is a medium to challenge themselves and gain access into organizational structures that have been heavily dominated by Hmong men. I have followed the Hmong pageant for years on social media and seen some winners fail to live up to the expectations they had for themselves, as well as others go on to do incredible work in their respective fields.

Former Miss Hmong USA Pageant contestant Kashia Vu also said the pageants allow women to demonstrate who they are and what they’re passionate about, beyond superficial aspects.

“Although every pageant is different, I think the purpose of the pageant is to allow contestants to showcase who they are, which should include what their goals are,” she said.

Some people are belittling Christina Xiong for being herself on stage when she doesn’t fit our perceived idea of a modern, modest and model Hmong woman. If she wants to win, she would need to fit that standard that had been set in 1968, to be judged by her beauty, poise and mannerism.

However, if Christina were to embody all those standards, she would also be critiqued for not being authentic as Hmong pageant contestants have been critiqued for decades. As Hmong women, we can’t win this argument.

Christina didn’t win the title of Miss Hmong USA. On Dec. 29, 2018, the title was awarded by the 10-judge panel of men and women to Pachia Lucy Vang. The second and third place were awarded to Crystal Yang and Luna Vang, respectively. However, as I watched the show from the crowd, Christina was definitely a fan favorite, just not our ntxhais nkauj ntsuab.