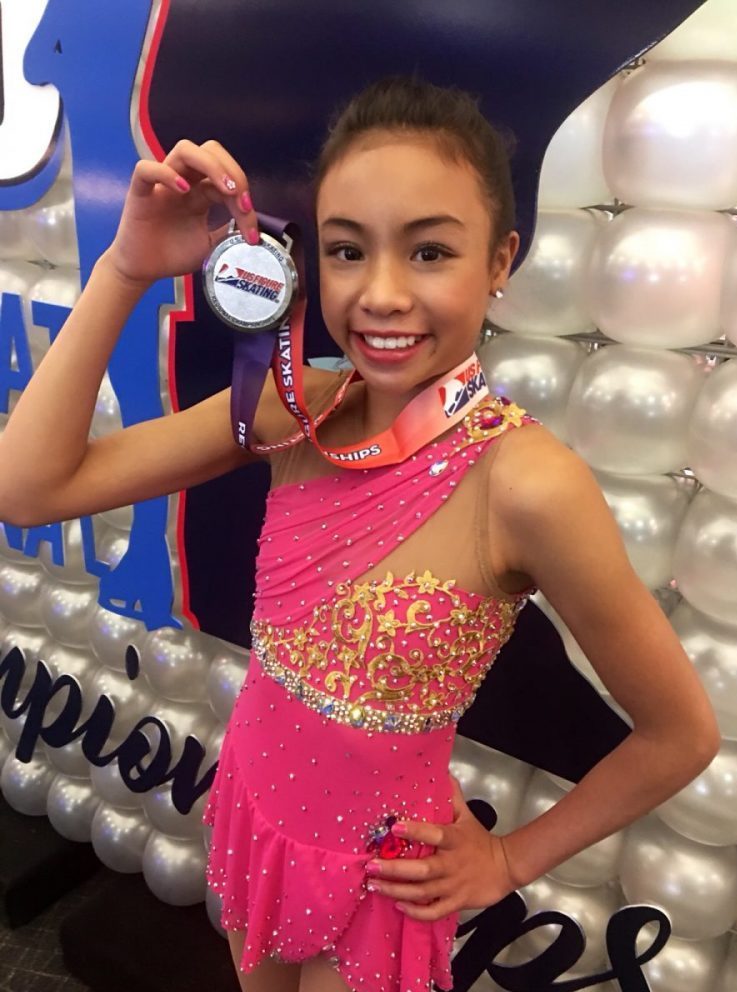 Isabelle was born on 05/29/2004 and has qualified to compete at the 2018 U.S. National Figure Skating Championship in San Jose, CA. Her road to Nationals include winning the Silver medal at the Upper Great Lakes Regional Championship and the Pewter medal at the Midwestern Sectionals. She’s currently just 13 years old!

While she’s still a young figure skater competing at the Intermediate level (3 levels before the Senior level)—her accomplishment is no less remarkable, because she is Lao America’s first ever figure skater to compete at this level...and perhaps, at all! Before we get to her interview below, here’s some background on this incredible athlete and her road to the 2018 US Figure Skating Championships. Just the top 12 skaters in each competitive level from across the nation can compete in this elite competition, happening from December 29-January 7 in San Jose, CA at the SAP Center. While only the senior levels are shown on primetime TV, you can catch every performance on Ice Network or, you can always subscribe to her YouTube channel, USAluvstickyrice.

Got that, so far?  We’ve got a 13-year-old Lao American competing at the Intermediate level at the U.S. National Figure Skating Championships. I’ll let that sink in while you click and watch Isabelle’s short program, below, at the Madison Open.

She currently trains with world-renowned Figure Skating coach and technical jump specialist, Alex Ouriashev.  Does the name sound familiar? Even if you’re just a sometime fan of the sport, you’ll know that this is the man that’s coached the likes of: 2-time US National Champion (2014, 2016) and 2014 U.S. Olympian Gracie Gold, U.S. National Pairs Skaters Haven Denney and Brandon Frazier, and Worlds Silver Medalist Shoma Uno.

Isabelle was also one of three young figure skaters featured on CNN iReport’s “Future Olympian Skaters” a few years ago. You can see her earlier story and how it’s played out until now. Spoiler: still impressive. She’s amassed quite a collection of awards on her way to get to where she is now.

So, how do you compete at this level at such a tender age? The answer is much simpler than the execution. She travels up to 4 hours a day (2 hours, back and forth) from her hometown of Sun Prairie, WI to the suburbs of Chicago. Her training sessions run 5-6 hours a day; which includes 4 hours of ice time with jump lessons, spins and edges, and choreography. When she’s not spending 5-6 hours a day on the ice, she takes classical ballet, dances hip hop, and works with a personal trainer. Oh yeah, there’s still the matter of obtaining an education. Due to her intense training schedule, she attends online schooling through the school district, which also provides a coach educator to ensure that her studies are on par with her skating. If that’s not already impressive–Isabelle can read the Lao language at a primary level and continues to practice daily.

On a personal note: I love that her parents have made being the Lao part of Lao American as important. And her parents? Her dad Kayphet is a refugee from Vientiane and her mom Jessica, is a refugee from a village outside of Savannakhet. Jessica arrived in Chicago in 1977, where they then moved to Minnesota when she was a year and half. Kayphet arrived in December 1979, at 9-years-old. Obviously, they didn’t have much and couldn’t participate in normal childhood activities like local American children. Kayphet soon enlisted with the Marine Corps and fought in the first Gulf War. Jessica, needing flexibility, left her job in the corporate Pharmaceutical industry to pursue a nursing degree to better fit her children’s needs, 13-year-old Isabelle and 10-year-old Benjamin. According to Jessica, being a Lao parent to someone like Isabelle is a strange, yet wonderful, thing:

“It’s such a different generation.  My generation, education was driven into us. It was a different kind of survival. Now—you’ll find Lao households where both parents have stable careers and are able to provide this kind of normal luxury. This would have been considered a waste of time for us! But it’s an opportunity we always dreamed of being able to provide for our kids. We always thought, if other races and people can do this–then Lao people can do it, too! We’re just as good and just as capable. Still, it’s a different environment and parenting style. As a product of that generation; of being drilled into us that education, hard work, and dedication will get us far, I hope that we have been able to transfer that to my kids. But I want them to know that it can be applied to other aspects of life, like sports or other passions. At the end of the day, if she enjoys doing this, we will continue to try and give her as much support as possible, even when the cost of participation is more than our mortgage!”

So, if you’re still wondering why this is such a big deal—consider that the annually held U.S. National Figure Skating Championships is the most prestigious figure skating competition sanctioned by U.S. Figure Skating, and is also the vehicle before making it to the Olympics (yes, that most prestigious athletic award) and you now have arrived at why Isabelle Inthisone’s accomplishment is especially significant.

The U.S. National Figure Skating Championships have been around since 1914—but this year, is one of those special years that comes every 4 years—it’s an Olympic year. So, the top 3 finishers (generally) in the Women’s Senior level make their final bid for the final selection, to be a delegate representing the United States to compete in the 2018 Winter Olympics in South Korea.

Isabelle is an Intermediate at 13, so she’s unable to compete for an Olympic spot, but she will be competing at her level, nonetheless. Her packed program consists of a double axel/triple salchow combination, triple toe combination, and triple loop. That’s 4 different jumps in the air, two of which are done in combination with one another. Now that we’ve gotten a little primer on the sport and her place in its history—let’s get to know her, through her own words.

London, England! All the pictures make it seem so attractive with lots to do.

Of all the places you’ve visited, where has been your favorite, thus far?

When I was 5 years old, my parents took us back to Laos. I got to visit and meet with family, we saw a lot of villages and stuff I’ve never seen here.

Why did you choose figure skating?

I started out swimming because my dad always wanted us to learn, but I was so scared of it. So, we switched to ballet and soccer. It was on the ice that everything felt right, to me. Instead of just wanting to have fun, I felt something more. It was the first time I discovered my competitive side.

What do you most enjoy about figure skating?

Jumping!  It makes me feel like I’m flying in the air.

What’s your most memorable memory from figure skating?

It’s a recent one—at Midwestern Sectional. I skated my long program, and, after I finished—I was in third place. The top 4 skaters are chosen to go to San Jose for Nationals. The skater after me bumped me to 4th. It was nerve-wracking. The last skater went on, and got an 8th place finish—that was when I knew I’d made it. It was a huge dream come true. I’ve been dreaming about Nationals ever since I have made it to an eligible level.

So, what areas do you think you can improve on?

Mental ability. Believing that I can really do it. Controlling my nerves and not having doubts plague me.

Are you doing other sports besides figure skating?

All the other sports I do are meant to enhance and benefit my figure skating. Ballet is about control; hip-hop dancing allows me to express myself and hopefully gives my performance a physical boost.

What subject do you enjoy most in school?

Math. It’s easy to understand because there’s a pattern.  It just comes naturally.

The absolute worst feeling is when you fall.  Your body is just slamming into the ice. It hurts.  Especially in competition when you’re not protected by padding.

What’s your dream for the future?

My dream is to one day represent my Lao-American heritage on Team USA and hopefully be able to compete at the 2022 Winter Olympics in Beijing. I’ll be 17 ½ years old, then.

What advice would you give another Lao person interested in figure skating?

Believe you can do it.  Not everyone will be successful their first try.  The more you practice the better you’ll become!

So, what does it take to become one of the best in the sport?

Figure skating—you have to be so well-rounded. You must have a strong core, incredible balance, grace, musicality, and presence. The sport is about having everything, not just the ability to catch a football and run, and when you crash into the ground—it’s not dirt you’re crashing into, and you aren’t wearing protective gear like padding and a helmet. You’re slamming hard at a high speed straight into an icy, cold, hard surface—wearing nothing but a costume meant to look good, not save you from pain.

Who is your hero in the sport?

At first, it was Michelle Kwan. Because of her performance in figure skating—she is one of the most famous athletes ever. As the sport keeps changing, a favorite of mine right now is Nathan Chen. He’s really showing that the impossible is possible!

How do you and your family handle all of this?

It’s really about taking it day by day and keeping the goals where they are meant to be. You never know what will happen next year. So, for now, at the Intermediate Level, I’ve got 5 triple jumps planned.

My favorite jump is the triple-toe and my favorite move is the Death-drop spin! I just love the feeling of flying.

Thanks so much for giving us some time to catch up with you before your big Nationals debut. You’ve already accomplished so much at your age. It’s pretty inspiring. Little Laos will be watching and rooting for you!