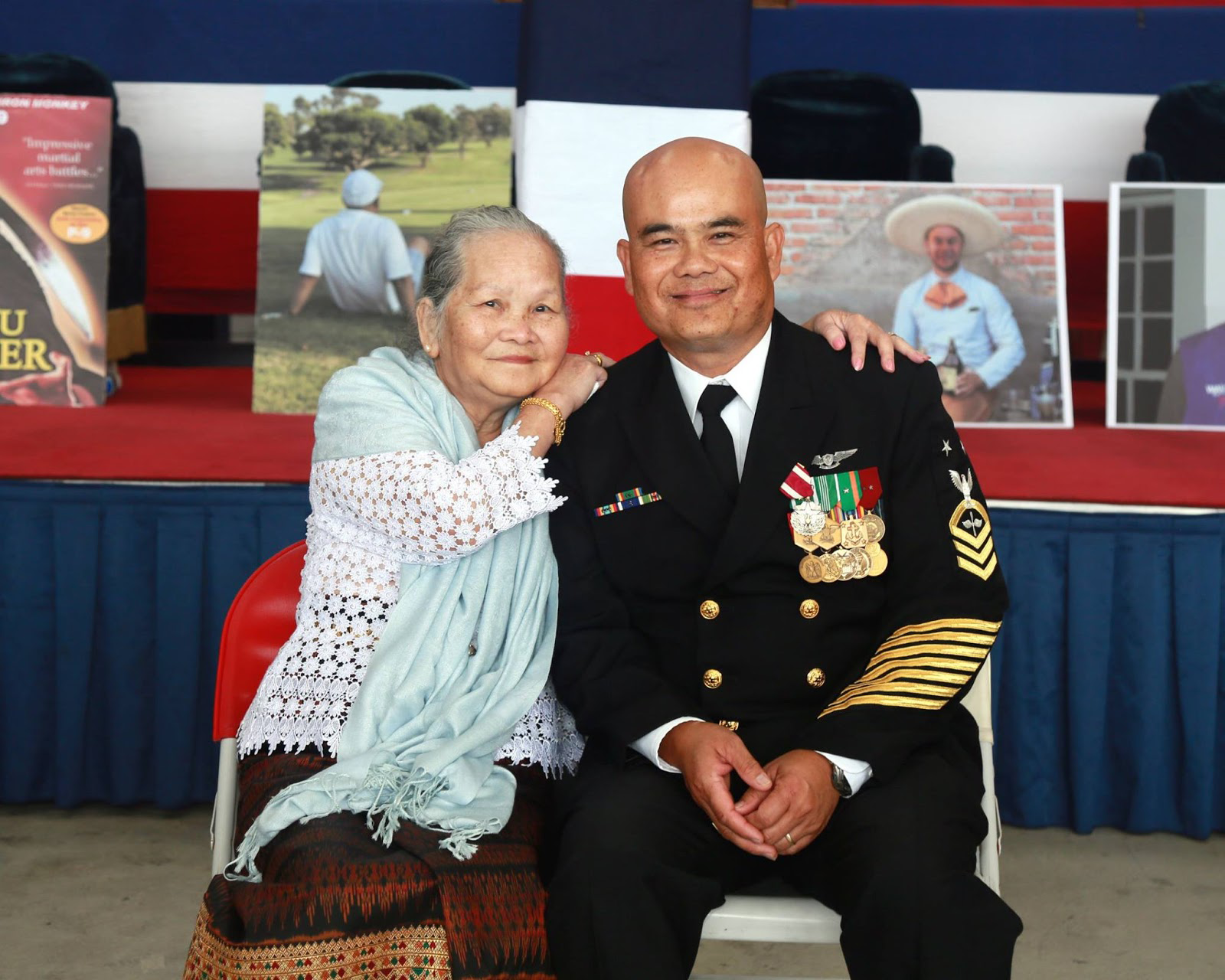 As my family shuttled through the gate at the Naval Air Station North Island in San Diego, CA this past weekend, I felt tense in the presence of armed military personnel on gate duty. We had our phones down and heads up from our side-conversations. As soon as my uncle Terry showed his identification, I felt an immediate reassurance as the sailor called out, “have a great day, Master Chief.” Rank and rate matters to these men and women who serve the United States Navy and all our armed forces. So when they presented Souliyong Terry Phousirith with an official retirement ceremony, it showed our family that this country truly appreciates my uncle’s 30 years of faithful and honorable service. Invited guests included command officers, his fellow retirees, non-commissioned officers, shipmates, sailors, friends, and family. He reached the rating of Maintenance Master Chief Petty Officer, making him the first Lao American to achieve the highest enlisted rating of the U.S. Navy.

In July of 1981, at the age of 14, Terry and his family of 9 that included my grandparents, dad, aunt, and uncles made the journey to enter the United States as refugees. Two years after graduating from high school, he enlisted in the U.S. Navy in December 1987, leaving his family in Minnesota to pursue a formidable career that we have been proud of since day one. Our family including his wife of 28 years, Vanna, and two sons stood watch as he deployed on various aircraft carriers, destroyers, cruisers, and frigates to places all over the world as an Enlisted Aviation Warfare Specialist. His rare visits back home were joyous moments for all of us but looking back, really bittersweet for my proud grandparents.

Terry first served as an aviation machinist’s mate technician fresh out of “A” school. His duties included checking and repairing aircraft engines and related systems such as fuel, cooling, wiring, and blade inspection. As he continued on his career, re-enlisting each time and gradually gaining more responsibility, he maintained the fleet of H-2 “Seasprite” helicopters, F-14 “Tomcat” TF-30 jet engines, and the T-700 turboshaft engines of the SH-60B “Seahawk” helicopter for various squadrons. During his time with the former Helicopter Anti-Submarine Squadron Light – 49 “Scorpions” (HSL-49), he contributed a safety measure of a stage plug cap that is now in the analysis manual for all H-60 helicopters. During high speed shaft balancing, the anti-ice bleed tube plug would fly off due to wear and tear and cause damage to blades, engine components, and possibly personnel.

His final tour of duty was for the Helicopter Maritime Squadron – 41 “Seahawks” (HSM-41), a fleet replacement squadron, dedicated to training new pilots and aircrew. As MMCPO, the pilots and aircrew rely on him for accident-free flight hours as he supervised the repair and replacement of mission critical systems such as sonobuoys for anti-submarine operations, multi-mode radar equipment, the turboshaft engine, and offensive weapons systems.

As I walked through the rehearsal with him a day earlier, it seemed clear to me how well respected this man is. He’s able to have light-hearted conversations with his fellow shipmates and able to push forward to get things done. When he’s on base, everybody knows he has arrived with his usual “Gooood Morning!” greeting. He is also known to be the first one in and the last one out because, “when you’re early, you’re on time, when you’re on time, you’re late, and when you’re late, well…”; it is a motto that will be recognized as his work ethic and responsibility to his duty. This commitment has earned him numerous commendations, medals, and ribbons from the Navy, Marine Corps, and Army.

The ceremony included an honor guard, a rendition of the national anthem sung by his niece Carmen, guest speakers, and a flag presentation of “Old Glory”. During the traditional Piping Ashore custom, the Navy rendered departing honors to this sailor who has served his country with patriotic distinction. As the boatswain’s pipe whistled, Terry asked, “permission to go ashore” one last time to signal the end of his naval career.

Thank for your service, Uncle Terry.