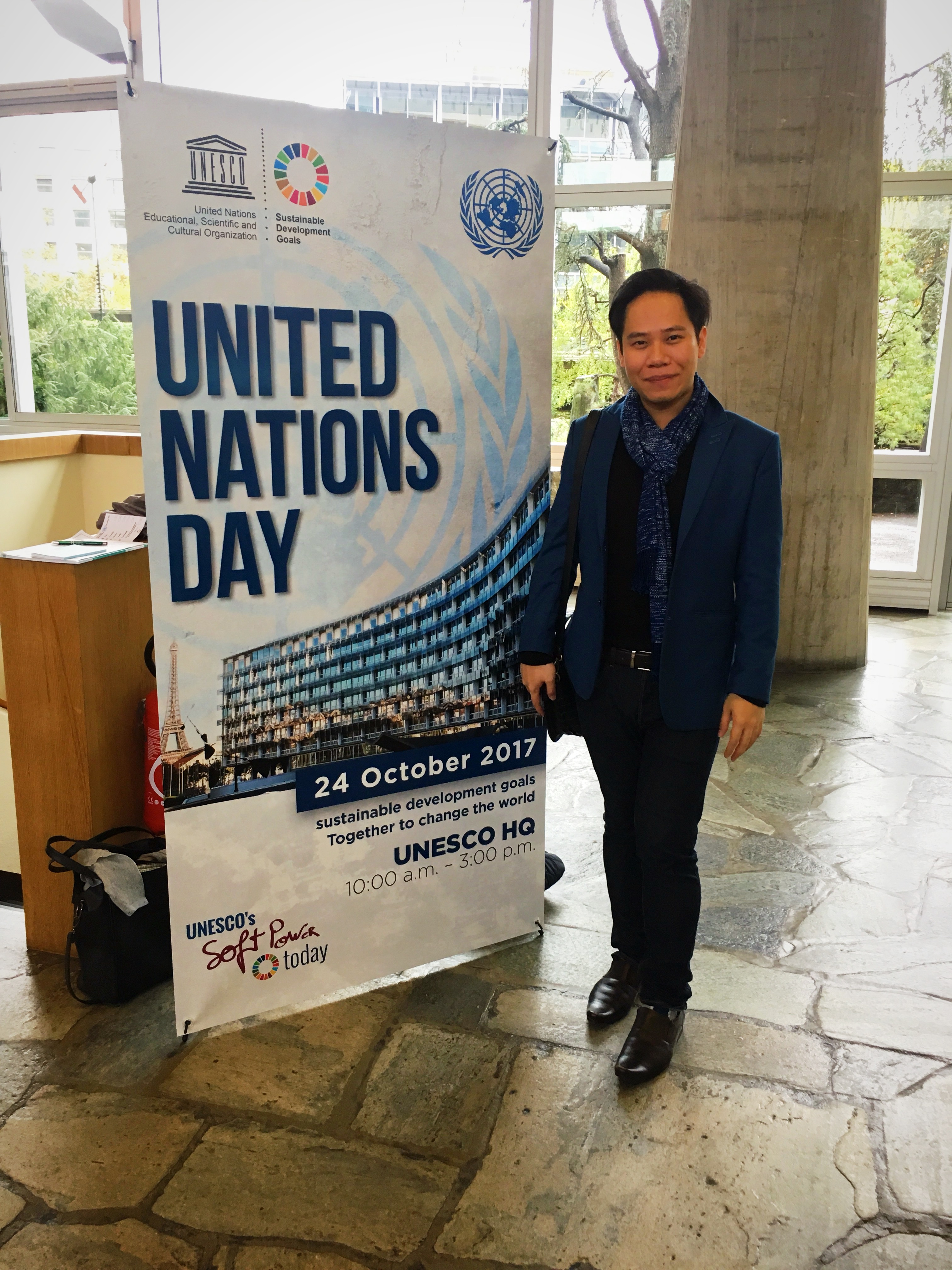 In continuing our recognition of LGBTQIA (Lesbian, Gay, Transgender, Queer, Intersex, Asexual) History Month, I interviewed Anan Bouapha, a well-known advocate in the LGBTQIA community in Vientiane, Laos. Anan is part of an active and increasingly visible LGBTQIA community that continues to engage Lao society and international partners. As president of the nongovernmental organization Proud to Be Us Laos, Anan played an instrumental role in organizing the first large-scale LGBTQ+ Pride event at the U.S. Embassy in Vientiane back in 2012. Born and raised in the capital of Vientiane, Anan continues his advocacy efforts throughout Laos and lectures about his work internationally. While currently based in Paris for graduate studies, Anan may struggle to find his favorite Lao dish of Mok Pa, but he is still able to talks about the current state of LGBTQIA affairs in Laos.

Was there a particular moment that compelled you to get into LGBTQIA advocacy in Laos?

We’ve been trying to partner with the government to help reduce HIV/AIDS infection among LGBTQI community members. We also want to reduce stigma and discrimination based on gender identity and sexual orientation, and enable a positive environment so they feel like being part of the national development. This work was compelled by my early days in HIV/AIDS prevention work among Gay men and Transgender women. I observed that our community faced lots of issues and I think changing policies is key for positive change.

What are the most important things about the history of the LGBTQI community in Laos that you wish the general public knew?

Laos is a very open-minded country, and I think being LGBTQI is absolutely not a problem, unlike other countries in the world. State government has a tendency to further their understanding and support for this community; mostly in the healthcare area. However, I think the core problem is we don’t talk about this topic at the work table. The public seems to be reluctant or not familiar with any kind of advocacy work. They get used to the idea that everything will be alright or it doesn’t matter; “bor pen yung” or “ya mun”.

It’s quite a new idea for the public to insert the notion of political advocacy into their actions because they think political talk is against the norm. Personally, I think they know much about the issues surrounding the LGBTQI community, but they just don’t see how this issue can be engaged for change yet.

What do you think has changed for the LGBTQIA community in Vientiane since the first LGBT Pride event in 2012?

Significant progress is hard to measure as there are several components needed to be integrated altogether to conquer this difficult work. However, our tireless contribution and ongoing movements, as well as the positive resilience of the Lao government in attempting to understand this issue, have made the community realize that things get better everyday. Examples are the first historic International Day Against Homophobia, Transphobia and Biphobia (IDAHOT) in 2015 was aired on the Lao National Television (government owned media) and a transgender outreach worker got the opportunity to talk about her hopes as a transgender person. This is an unforgettable moment for us nationwide to see this appear in the national media. It is a historic timeline for the LGBTQI community in Laos. Also, the IDAHOT 2017 in last May was attended by some officials from the Lao Ministry of Foreign Affairs and the event was allowed to be aired on the national television again for the second time. This is the beginning of that positive change.

Most recently, we were invited by the United Nations Population Fund and The Lao Youth Union (the most influential government cabinet that deals with youth empowerment affairs) to be a part of the National Youth Development Strategic Plan. These events could be interpreted as a positive recognition from the Lao government after our hard work and perseverance to make the voices of LGBTQI community heard by using local approach with our government and technical support from international governments and coalitions. Even getting acceptance from family can be really difficult, so I think we have to be patient for the state level to understand us. Community needs to speak the language of government and work side to side with peaceful dialogue because at the end of the day we have the same goal that requires the consolidation of our solidarity to make our society as well as the nation a stronger one.

Being LGBTQI is pretty much accepted by the society and in fact many people seem to adore and want to be around them because they have a good sense of humor, and are funny and happy people. This positive stereotype has been in the Lao society for years and decades since the coming out of LGBTQI community. However, this might be the only positive view the community receives from public. When it comes to top jobs, professional capacity, respectful positions or academic opportunities– they are another story. Unfortunately, the LGBTQI community are not viewed this way as society thinks they are only good at entertainment jobs, and are not suitable to take leadership jobs, especially in a large and respectable companies and government offices.

Do you think progress is being made for LGBTQI acceptance in Laos? Would you like to see progress made faster? Do you ever think things are changing too fast?

Progress is being made for sure. The Lao government has been including “Men who have sex with Men” and Transgender women (both are health terms) into the HIV/AIDS Prevention National Strategic Plan since the last decade. It’s still only a health focus, but it’s the beginning of many actions after this.

How does it feel to be the face of LGBTQI progress for Laos?

It’s an honorable achievement because if one day our actions and efforts are proven to be efficient in making the real change, it will be benefit the LGBTQI community nationwide as we already paved the way for younger generations to follow. There are many unheard voices and I think it’s significant for all of us not just show empathy, but actually listen then do something about it.

In interviews, you have said that you wanted to bring awareness to issues that LGBTQI community in Laos faces; beyond HIV/AIDS prevention. What are some other issues that you think need awareness?

According to the IDAHOT 2017, we aim for equal employment opportunity and minimizing stigma and discrimination at the work place and education settings.

I have often noticed that LGBTQI organizations and media in the U.S. tend to focus mostly on gay cisgender men. This leaves many women and transgender individuals feeling underrepresented in LGBTQI spaces here. Is this similar to the situation in Laos at all?

I think it’s similar to many parts of the world. Personally, I think the underrepresentation of gay women is because they are not viewed as the most at-risk group as if gay men, in terms of sexual health issues, so they are often neglected in the advocacy movement. For transgender women, stigma and discrimination is incredibly intense as many dropped out from school, engaged in low-paid works, some in prostitution and even drug use. Perhaps they need most attention than many subgroups. Therefore, Proud to be us Laos (my organisation) prioritizes the active participation from lesbian women and transgender women, so their voices are heard.

We are now trying to get the participation of Transmen in our project. However, many are still closeted and don’t want to be seen in public affairs yet. Our initial step is making the shadow play that reflects the lives of lesbian and Tomboy first, which will be the first step to engage transmen in the near future. Shadow Play is about the life of transgender women created by Proud to be us Laos; which was screened at the IDAHOT reception at the Australian Embassy on the 17th May, 2017.

What does collaboration and community-building look like between different Lao communities, whether they’re LGBTQI or not, or in Laos or abroad?

Being LGBTQI is universal and is a human reality. Different geopolitical spheres do have different effects on people’s lives, however, we share similar goals and dreams.

At the end of the day, we live in the same world, same community, and we have similar desires. LGBTQI advocacy work will not be successful without the help and understanding from non-LGBTQI people, and LGBTQI people might be the loved ones of non-LGBTQI people. They can be your fathers, mothers, brothers, sisters, children, and whoever in your life. We should be more open-minded and accept the differences of each other.

Are you working on any new projects we should be aware of?

We are now working on a project called “Learning Innovation and Communication Method”, supported by a Dutch NGO called MCNV and funded by VOICE – Dutch Ministry of Foreign Affairs.

Learn more about Proud to Be Us – Laos – ພູມໃຈທີ່ເປັນເຮົາ by following them on Facebook.