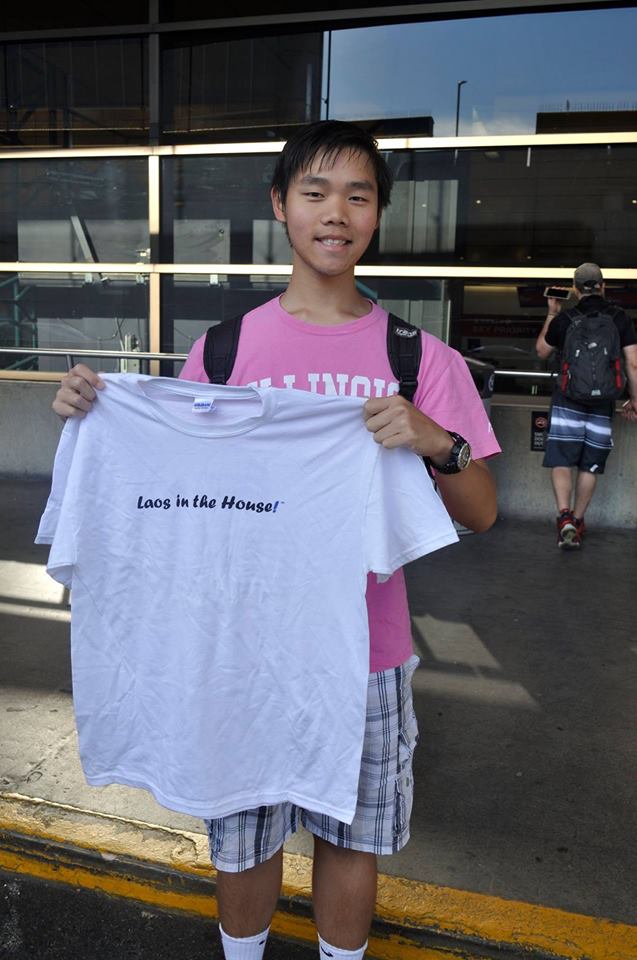 As I start writing this, it has been a few weeks since the 4th Lao American Writers Summit has ended. Although I still feel sad that the summit is over, I still feel a strong emotional high from it. Before I begin, I would like to introduce myself. My name is Tommy Shee. I am three-quarters Chinese and one-quarter Laotian, born and raised in Missouri. In order to write a full reflection about LAWS, I wanted to cover all aspects of it, or at least the aspects I found relevant enough to include, such as, but not limited to: before the conference, the conference itself, and thoughts and advice on the summit overall.

Starting off, how did I hear about this summit? I heard of this summit from previous attendees when I was looking for ways to meet more Lao people as well as learn more about what it means to be Laotian Chinese American. Unfortunately, the previous attendees I talked to could not make it this year due to work-related reasons. As a result, I went into this summit not knowing anyone and having the mentality to “go with the flow.” Other than talking to my friends and previous attendees, I also tried to contact UW’s LSA (Lao Student Association) to see who from there would be attending, plan a meet up with them, and find housing. Fortunately, I was able to get in contact with Nick Khamphilom and he was able to house me for one night. For the remaining two nights, I chose to use Airbnb, as opposed to booking a hotel.

On Thursday morning, I took the route from St. Louis to Minneapolis to Seattle. Unfortunately, I ended up getting to Seattle four hours late, but was still able to do everything me and the LSA members planned to do, which entailed: visiting Bruce and Brandon Lee’s grave site (two of my biggest idols/role models), getting Chatime, and exploring various parts of Seattle. After all of this, we went back to Nick’s house, ate dinner, and went to bed way past midnight.

On Friday morning, Nick and I left for LAWS a little bit after 8:00 a.m. When I first entered Highline College, not only did I feel shy (since I was in a room with a bunch of strangers), but I also felt overwhelmed (since I have not seen so many Lao people gathered in such a way). Luckily, I was able to overcome my shyness by lunchtime and that was largely thanks to the icebreaker we played in the morning, where I became known as the person wearing an Illinois shirt who was from Missouri. After lunch came the workshops. The first workshop I attended was Getting Lao’d About Bi-Cultural Identity. Since lunch was just before this workshop, I showed up just a little late to it, missed the screening of the documentary, but was able to contribute to little group discussion when we broke up into little groups. It was nice I could talk about my experiences of being bi-cultural, share a little bit about a final project/documentary I made on two Lao communities in Illinois, and meet some other attendees who identified as being bi-cultural. The second workshop I attended was Empowering Lao’d Student Activism & Social Justice. Although I was pretty exhausted by the time this workshop rolled around, social activism is certainly an important issue. Personally, I was expecting a little more from this workshop, but it just seemed too much like a classroom lecture. Afterwards, I planned to stay at Highline College until the Gallery Reception, but I was invited by Dara Stieglitz, another attendee, to eat dinner with her family. After getting dinner and going to the reception, Dara dropped me off at my Airbnb and the rest of the night went down in infamy, more on this later.

On Saturday morning, I woke up relatively early in order to get ready for Dara to pick me up since I could not stand my Airbnb much longer. When I got to Highline College, a thought occurred to me, since this may be the last time I see some of the attendees, I best network with them and exchange Facebook information/other contact information. Not only was that thought going through my mind, but I was also trying to find someone who would be willing to house me that night since I did not want to return to the Airbnb I booked. As for the morning icebreaker, I really liked it since I was able to meet some cool people. As for lunch, I am still surprised that the food from that lunch went so quickly. As with Friday, the workshops followed lunch. The first workshop I attended was Writing Lao’d with Xieng Mieng: Creating Children’s Book Workshop, presented by Nor Sanavongsay. Although we were supposed to create a children’s book, I ended up creating a non-fiction book chronicling my journey of self-discovery thus far and my intended resolution for my journey. Much to my surprise, it was well-received by many of the participants of the workshop after I volunteered to share my creation. The second workshop I attended was Lao American Writing: From Inspiration to the Page presented Bryan Thao Worra. It was nice getting to learn some ideas on how to overcome writer’s block, something I experience quite often in school.

Afterwards, I went with Bryan and Krysada Binly Phounsiri, one of the artists who performed during the summit, back to the Airbnb place they and a few other attendees were staying at, since they had room for me to stay, and we had a long and intriguing conversation about being Lao American and life in general. After spending some time at the house, we took off for the closing reception party. While I am not a fan of loud parties, it was nice getting to meet a ton of people there as well as getting a chance to write a seven page note/letter in the little notebook that Bryan was passing around. Bryan and I returned back to the Airbnb a little past midnight. When we got back we talked with Loy Khambay-Correa, who was also staying with us, until 2:00 a.m. Although I did not want to go to bed, I had to wake up at about 6:30 a.m. to get to my flight.

In general, I loved this summit. When I was dropped off at SeaTac by Bryan early Sunday morning, he gave me a shirt from the first ever LAWS. He said he couldn’t wait to see what I will be doing next and it really felt like one of those “passing the torch” moments. After getting checked in, I was walking towards my gate and I thought of the summit and tears came to my eyes. I cried for about 20 to 25 minutes while I was walking and people were looking at me but I could have cared less what they thought of me. I might have cried due to a lack of sleep, but it could have also been due to all the feelings I had towards the summit.

Thank you, Kathy Thaviseth, for answering a lot of the questions I had about LAWS before the summit took place. Thank you, Dara Stieglitz, for paying for my dinner Friday night, for driving me to and from places, and for helping me find a place to stay Saturday night. Thank you, Kalaya Bidwell, for offering me to stay at your place. Thank you, Krysada Binly Phounsiri, for conversing with me on Saturday afternoon and for sharing your experiences of last year’s LAWS with me. Thank you, Nor Sanavongsay, for giving me a signed copy of your book and a shirt from last year’s LAWS. Thank you, Loy Khambay-Correa, for the free tote bag as well as staying up and talking with me Saturday night. Thank you, Bryan Thao Worra, for waking up early in the morning and driving me to the airport as well as for the shirt. With that aside, what would I have done differently? I wish I could have taken more pictures of me and the friends I made as well as of the food. I wish I could have interacted with more people and made more connections. I wish I could have attended the Painting Mt. Rainier, Lao’d & Clear workshop in place of the Empowering Lao’d Student Activism & Social Justice. I wish I could have asked to be housed with other attendees instead of foolishly booking an Airbnb by myself. On that note, the reason I did not like my Airbnb was because it was not as described, dirty, and the place made me feel very uneasy. Even though I did waste $48 dollars, I am glad that I was able to find comfortable housing Saturday night. Anyways, while there is no way I can change things that have already occurred, these are definitely things for me to be more aware of for the next LAWS.

Would I recommend you all to attend a future LAWS? Yes, there are many reasons to attend the next one, whenever it is. First, although I knew no one coming in, I was surprised at how down-to-earth and approachable many people where, even the ones who I perceived to be popular award winners. I mean, I have been given the opportunity to write on here (Little Laos on the Prairie), so people are definitely approachable and this is a case in point. Second, although there was another event that was within driving distance for me and that I was personally invited to, I chose LAWS over that event since I wanted to meet new people as well as discover myself even more. LAWS has inspired me to want to continue connecting with other Lao people, continue learning about and discovering myself, as well as continuing making a difference in the Lao communities around me. If you want to attend a future summit or want to discover yourself, do not get discouraged by what other people think and say. Before going to LAWS, I told my cousin, who is part Lao, and my aunt, who is half Lao, that I was attending a summit for Lao American writers and they both laughed it off as if the summit were some kind of joke. After going to LAWS, I told another cousin, who is also part Lao and the sister of the cousin I previously mentioned, how touched I was by the summit and the people, and she questioned why I was so obsessed with interacting with Lao people when I am not all that Lao to begin with. To be honest, all the money and time put into this was well worth it.

No matter how busy I will be when the next LAWS comes around, I would happily drop everything to attend.

Interested in writing or contributing your voice to Little Laos on the Prairie? Send it over to editor@littlelaos.org.