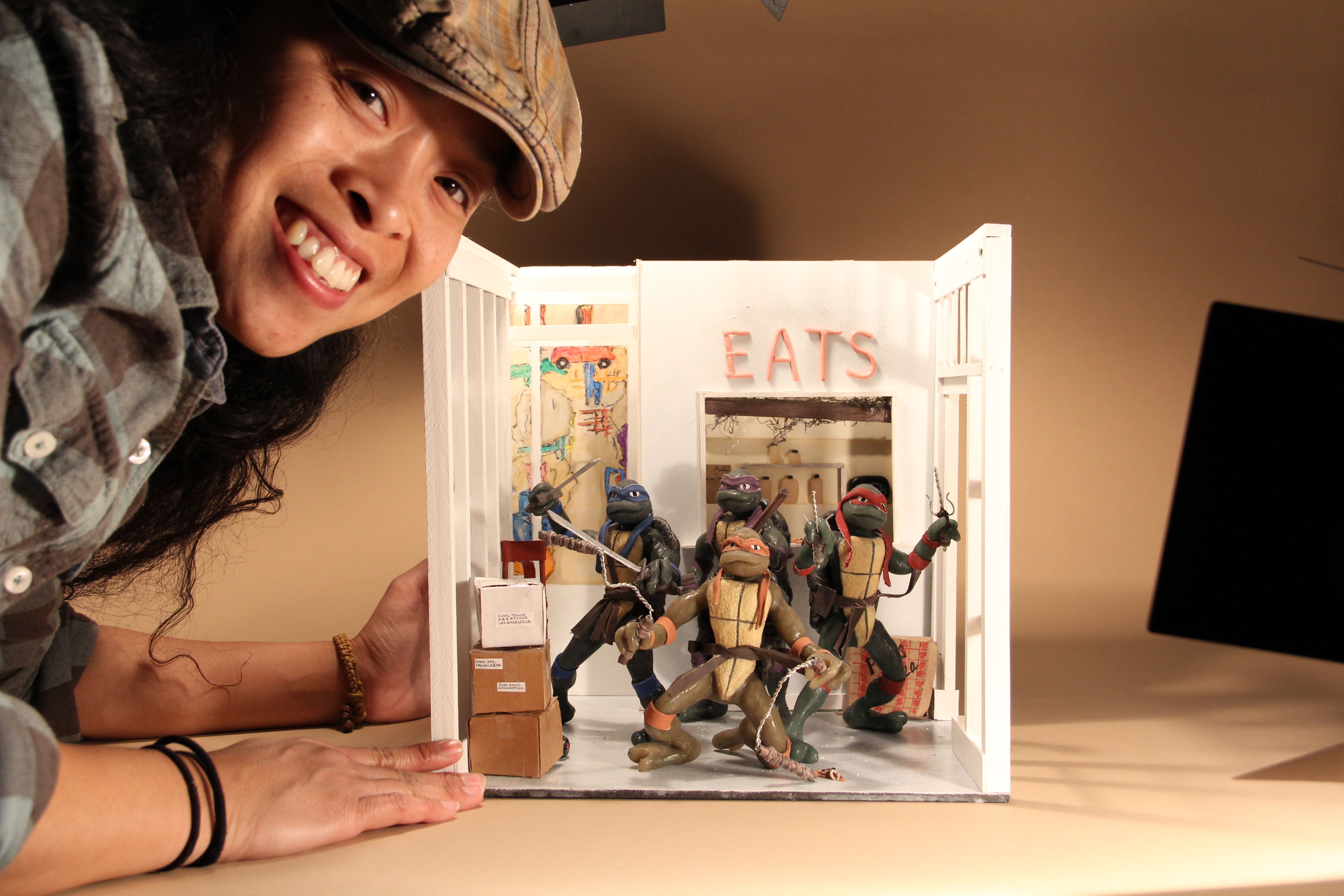 This week we had a chance to sit down with Lao American artist and animator Carol Rasaphangthong also known as Carol K. Ras, who founded Cool Town Creations in Los Angeles. Over the years they’ve created short films and videos featuring original characters to well-known pop culture icons such as Mr. Spock, the supernatural investigator John Constantine from the comics, and more, applying their unique mix of humor and professionalism to each project.

Can you tell us a little about yourself, and how did you develop an interest in art and animation in particular? What’s a part of your family’s story in coming to America that lingers with you the most?

In a nutshell, I am like a Jill of all trades. Haha. I consider myself a conceptual artist, not because I can’t execute my vision – because I can, but because it’s a broader blanket that covers the many corners of the creative world. I do many things and my passion is creation – I love, love, LOVE to create. I am a very visual person with a natural curiosity for things and an inclination for how stuff works and what the mechanics are behind them. This goes for architecture, storytelling, technology etc., and it’s how I like learn and how I sometimes happen upon concepts, inventions and so on.

My interest for animation entered my life at a very early age and like most children, I watched cartoons all the time and really, really enjoyed newspaper comic strips. I loved that it was like animation on-the-go but not exactly animated and perhaps it was the artwork that made me feel this way and what connected still pictures in cells to moving pictures on screen. But what really took my love for animation to whole other level was Rudolph the Red Nosed Reindeer and The California Raisins, which I didn’t know at the time was stop-motion. It seems everything sort of just fell into place.

Coming to America for my family is a secondary experience for me. I was the only one born in America, the rest of my family members were originally from Laos before becoming citizens. I know their journey to America was a daring one and the stories I’ve been told about how they got here, and all that they went through humbles me and inspires me to want to reach my truest potentials. They made a huge life-changing decision to come here for the betterment of all of our futures and when I think about that and how scary that had to have been, I become more motivated than ever to find my definition of success both in the creative field and in life in general so that I could repay them for their bravery in making that choice and to pay it forward by providing opportunities to the generation that follows.

What was it like growing up? And what are some of the ways you feel it affects your approach to creating art and being a part of the community?

Growing up bi-racial had its challenges but for the most part I had a good childhood. My parents let me be, they allowed me to be expressive, to experiment and never once forbid me from creating and showing my artistic side – in fact, they embraced it and at times, would modestly brag about it. I am the youngest of six and there’s an age gap between myself and the sister just before me. While we were close, there were times where I couldn’t tag along because I was too young so I would resort to a small corner in our home that housed all my Lego, GI Joe, and other random toys that most little girls didn’t play with along with a bunch of printing paper, pencils, pens and other art supplies. This was my haven, it was where I would create, draw, play, imagine, fantasize myself being an action hero – all sorts of crazy, creative commotion came from that corner. I always knew I didn’t quite fit in, I was an extrovert during school hours and an introvert once that late afternoon school bell rang. I often didn’t care too much to hangout with the other kids, just really liked being in my own imagination.

I think my family knew who I would become long before I would know for myself, and I’m grateful for that because most traditional Asian parents are really hard on their kids about having a promising future and stability, which is understandable. My parent’s support, along with my siblings’, since my early days of creating have been immeasurable and truly indescribable. Unbeknownst to them, they’ve all taught me a lot and there are times that require me to apply some of the skills that I picked up from them along the way in my work today. I am eternally indebted to them for their love and support. I am the sum of my siblings, parents and everyone that I have ever met and consciously or subconsciously they and/or what they’ve taught me, may reflect in my work.

Both. I have my phases, but in most cases coffee before tea.

What’s your least favorite trend in modern animation these days?

Can’t really say that there’s anything in the animation world that I don’t admire. I love it at every level and to all calibers. It’s such a powerful tool and can be used in so many ways to support a story or to enhance a world. At times, I like some things to be as pure and as true to its art form as possible, for example stop-motion, but there are times where I like a mixture of mediums including stop-motion with other formats. It all really depends on what the concept is and there are some things out there that are not done well and some that are, which both have takeaways such as what not to do…EVER…and what to try and possibly improve upon, technically and so on.

What’s a skill you picked up which was unexpectedly useful in your art?

Cosmetology. My mother was a cosmetologist and I didn’t think I inherited this skill whatsoever since I am very bad at anything in relation to it. It was only until recently where I discovered that it was a hidden skill lying dormant this whole time, finally revealing itself when I started experimenting with different materials for puppet hair. I still wouldn’t trust me on a human head though – or anything living for that matter – considering all the petroleum jelly and tacky wax that went into styling those puppet’s hair. Haha.

Results keep me motivated. I can never wait to see a vision fully realized and the excitement in taking action towards it is what continually drives me. And once it comes to fruition, I can’t help but want to experience it all over again.

What’s something you might change about our understanding of our culture? What’s a value you’d preserve?

Laos is such a diverse country and many people might not know that. It’s like the melting pot of Asia and its people is a mixture of indigenous Laotians and all sorts of other Asian ethnic groups. Our dishes are as diverse as the people who make up the culture and it’s such a beautiful thing!

The value I would preserve is our culture’s hospitality, selflessness, and communal ways. Growing up in America but in a predominately Laotian community, I’ve always witnessed the culture demonstrating generosity, loyalty and respect for the next person and I don’t think I’d be the person I am without those values.

Bamboo soup – and I mean, the green, swampy looking soup (gang no mai, straight up)

When are you most satisfied with a film you’ve made?

Whether it be something big, like an idea as a whole, or something as small as a prop, seeing what was once an imagination come to life and function in the physical world is truly an experience that is incomparable, especially when you’re the one who crafted it and made it tangible in some way, shape or form. There’s a special feeling that follows the materialization of the imagination, it’s such a cool and rewarding thing to be able to let people into your thoughts by externalizing them and making them palpable – then I say, “Now you know what I’ve been thinking…” it’s literally in your face, haha!

What’s your dream project as an animator these days?

Being an animator is a dream job in and of itself. I get to create without boundaries, build elaborate sets and create an entire world on a smaller scale, fabricate and design puppets and props, experiment without limitations, collaborate with amazing people all whilst on a journey to tell a compelling story that is visually stunning with an underlying message that is either educational, entertaining, enlightening, encouraging or inspirational in more ways than one. I’m lucky to be where I am and I love every minute of it.

What’s your starting advice for anyone thinking of getting into animation seriously?

My advice is to experiment, have fun, fail and eff up…A LOT. There’s this misconception about failing when really all it is, is a means of improvement, a way of gauging your progress and a huge, huge part of growth. If you want to get good at something, you have to have a new relationship with failing – it’s inevitable and YOU NEED IT to succeed – at anything. There’s no getting around it, just embrace it, it’s going to teach you more than it could hurt you. Don’t give up, the reward is always bigger than the obstacle. Dive in, try some techniques and see what work for you, there’s no right or wrong, only preferences and you may discover a whole other method that no one else is doing and it could be groundbreaking…just simply DO IT.

Folklore, fables and original tales are in the works for both film and other mediums, but aside from film and animation, authorship is definitely in line and, of course, the vast unknown is always what’s next for me.