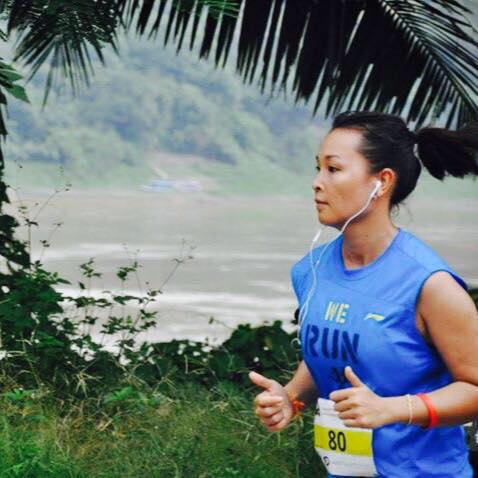 It’ll be three years since Thouni Seneyakone permanently moved back home to the cozy capital of Vientiane. Almost a decade ago, we were just nimble freshmen at the University of Minnesota, learning the art of planning cultural events as board members of the Lao Students Association. From Laos to Minnesota at the age of 10 and now back to Laos as an adult, it’s been a journey that’s come full circle. “Returning to Laos to work and live here has always been my goal.”

On a typical day at sunrise, you can catch an energetic Thouni and her running group ‘Team We Run’ jogging along the streets of Vientiane. An avid runner and sports enthusiast, Thouni and friends formed Events for Good, a socially-conscious sports event planning company based in Vientiane, which focuses on “organizing sporting events to promote healthy, active lifestyles and raising funds to help local communities.”

This March 6th, Thouni is organizing the Vientiane International Half Marathon, the first in the capital city to be backed by many big supporters, including the Lao government. More than 500 local and international runners have registered, coming from the Southeast Asian region and the rest of the world.

Last time LLOTP caught up with Thouni, she was organizing Village Focus International’s ultramarathon in Pakse to bring awareness to Laos’ human trafficking issue. It’s been her calling since then. We chat about her new start-up, Events for Good and her passion integrating healthy living and social change.

You’re one of the few active runners I know. What motivates you to run?

I started to run when a group of friends in Minnesota told me I had to sign up for the Twin Cities Marathon in 2011, or else they’d break my legs. I survived and continue to run ever since.

Team We Run in Khonkaen, Thailand

Tell me about the group of Lao women runners you’re a part of.

When I moved to Laos in 2013 to organize an ultra marathon from Pakse to Attapeu, I got introduced to a running group by Carlo Bacalla, called ‘Team We Run’. I have been running with this group for the past year. I find it to be an amazing support group in Vientiane. We travel to run around the region together and the friendship gets stronger and stronger every day. The group helps build women to be more confident in themselves and it gives them an outlet to be who they want to be.

What is the current local perspective about healthy living in Vientiane?

There are people exercising regularly but that group of people is still small. It’s quite difficult to get people to sign up for a 10K and 21K run. We’re hoping that by hosting the Vientiane International Half Marathon annually, people will have something to look forward to and train towards it. I think their perspective will change if we continue to have sporting events regularly and continued support from the government and private sectors.

This is the first time you’re hosting the Vientiane International Half Marathon in the city. What do you hope to accomplish with the event?

There were running events hosted in Vientiane before, but it was discontinued in 2009. This is the first time that the Governor’s Office and the Ministry of Sports and Education has approved this kind of event. We need 1,000 more registered for this first official run!

What advice do you have for other young Lao women today?

My advice is to be the change. Try something new. Step out of your comfort zone. Be challenged and make the change.

Learn more at Events for Good. If you’ll be in Vientiane for the run, register online at Vientiane International Half Marathon. Follow them on Facebook to get the latest updates.