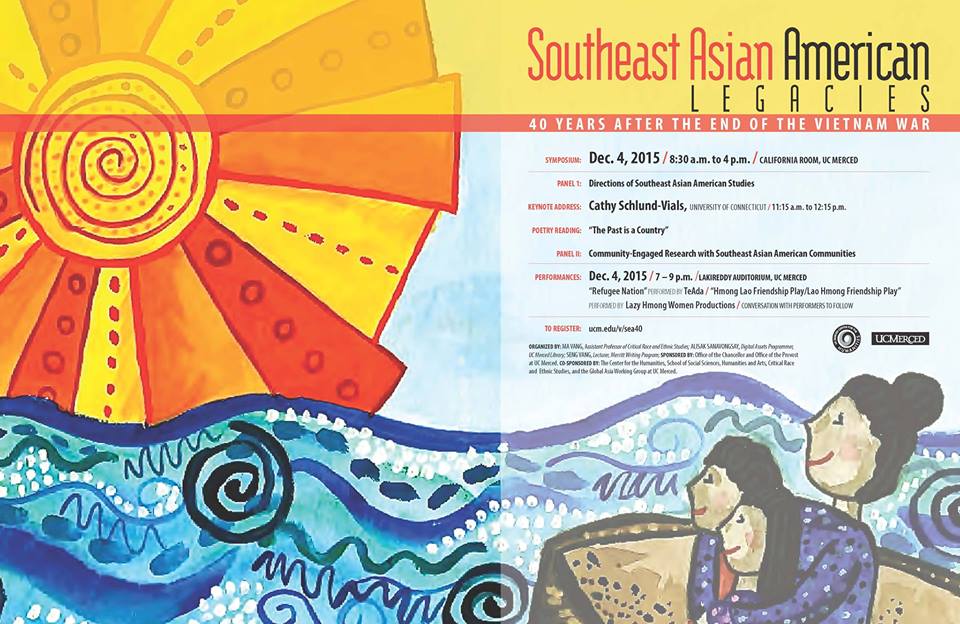 The University of Merced is convening an exciting symposium on Friday, December 4th: Southeast Asian American Legacies: 40 Years After the End of the Vietnam War. According to the organizers:

The symposium at UC Merced will bring together scholars, community members, and artists to discuss the Vietnam War and its human legacies. 2015 marks the 40th anniversary of the Fall of Saigon, the end of a war that claimed the lives of an estimated 58,260 American troops and over 4 million Southeast Asians across Vietnam, Laos, and Cambodia. Even 40 years after the war, Vietnam continues to haunt politics and society from debates about foreign policy to popular culture. 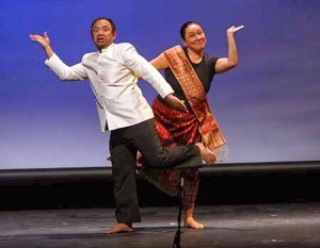 Later in the day, the accomplished founders of  TeAda Productions will present part of Refugee Nation and acclaimed playwrights May Lee-Yang and Saymoukda Duangphouxay Vongsay will come from Minnesota to present Hmong-Lao Friendship Play OR Lao-Hmong Friendship Play.

Collaboratively researched, written, and performed, Hmong-Lao Friendship Play / Lao-Hmong Friendship Play debuted earlier this Fall to substantial praise and sold-out shows for the frank way the playwrights explored cultural relativism between the Hmong and the Lao, both in Laos and in Minnesota. This show is described as “a treasure trove of stories, such as the one about two fathers who were fighters – one a Captain in the CIA-trained Chao Fa (guerilla fighters), the other a buffalo-riding gangster, or the story of two patriarchs – one a provincial governor and the other a provincial governor of the Hmong version of Laos, or the story about what a Lao girl had to do to become an honorary Hmong.”

As a play, Refugee Nation has been evolving since it began touring. Many Little Laos on the Prairie Readers may remember when it first came to Minnesota in 2010 at Intermedia Arts. As they described it back then, “Refugee Nation is about a young generation struggling to understand their history and the silence of an elder generation still healing from the traumas of war.”  More than just a telling of Laotian American history, these performances eloquently touches upon issues relating to the refugee experience, assimilation, generation gap, and mental health using drama, film, music, and audience interaction, and personalizes these issues through a genuine Laotian American perspective.

Refugee Nation has taken on particular relevance this season with many looking at the play to build a deeper understanding of how communities face change, loss, struggle, healing, and the unrelenting strength of the human spirit.

Be sure to mark this down on your calendar, and register ahead of time. It’s free, and this is an exceptional gathering of many of the leading thinkers, artists and community builders from all walks of life coming to Merced. You won’t want to miss it!

~Staff, Little Laos on the Prairie