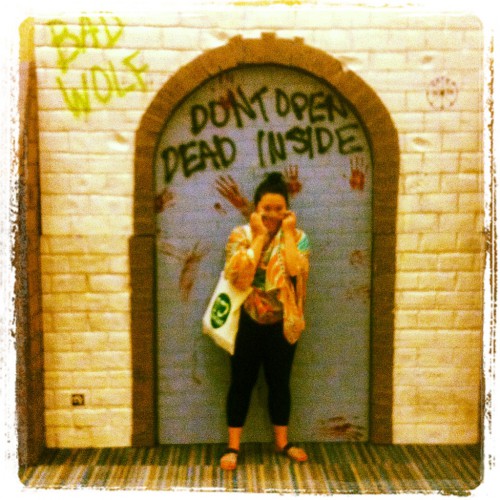 Halloween is awesome, but it can be tough figuring out an original costume that really brings the scary. Especially one that involves traditional Lao ghosts and monsters.

Little Laos On the Prairie’s resident horror expert, Bryan Thao Worra, is one of the first Lao writers to become a professional member of the international Horror Writer’s Association, so it seemed fitting to ask him for ideas. In years past, he discussed some classic phi for consideration, but here are some other great ideas you can try, esepecially if you’re in a time crunch:

Put Lao folks in a room long enough under the right conditions, and pretty soon they’ll start to tell ghost stories or tales of the weird, and the unexplainable. Our community has a particular taste for stories of horror and the macabre that goes well with Halloween celebrations, although few of our ghost stories are written down, traditionally. You’ll have to ask your parents and elders for the REALLY scary ones.

In the US, there aren’t a lot of costumes for Lao that incorporate our traditional heritage, especially in a respectful way. For now, we might consider that a good thing, considering the number of awful costumes out each year like sexy geisha, sexy ninja, sexy sumo wrestler, and so on. But what are our options?

It’s always easy for us to do an Asian ghost girl or ghost boy. That look goes back thousands of years and was popularized in the US through films such as The Ring and The Grudge. It’s a classic standby, but really ought to be one of your last resorts considering how many other great creatures and concepts are possible.

In the Lao tradition, there’s a significantly high number of Phi who are cannibal grandmothers such as Phi Ya Moi, Phi Kongkoi, and Phi Ya Wom. It taps into a lot of our primal cultural fears because we’re taught to respect our elders who raised us and took care of us. Then suddenly, you’re running into a grandmother ghost who wants to eat you and use your bones for pho. Scary!

In the US, it’s fairly easy to find rubber masks and makeup that let you create old ladies. Add a commonly available wig of white hair, some rubber claw hands or something similar, and a traditional Lao outfit (or to mix things up a bit, a nice clubbing outfit) and you’re good to go.

Seua Saming, or the weretigers of Southeast Asia can be done in a variety of ways, some more effective than others, and it’s one of my personal favorites because there are so many variations that can be done with readily available materials.

Unlike werewolves, weretigers are able to change their form any time they want, into anything they want. In the old days in remote mountains of Laos, many tribes wouldn’t touch jewelry they find on the road, because it could be a disguised weretiger. But the most commonly reported forms weretigers have taken included bathing beauties, Buddhist monks, or babies in the forest. The weretigers rarely show themselves as full tigers or two-legged tigers, and if you really wanted to, you could get away with a set of fangs or “I’m a weretiger. They look just like everybody else…”

You will want to be careful not to run around in a weretiger costume around a real weretiger, however…

You can also go with the classic “Worker at the Padaek Factory,” which should need no further explanation. Finish your outfit with a nice rubber apron and industrial gloves, plus a jar of padaek from under grandma’s sink. Voila! But don’t drop the padaek or that will end the party real quick.

This one is also open to many possible interpretations: If all people left you at the Halloween costume shops are the things to make an old man costume, you can go with “Ancient teacher of Muay Lao.” You could wear a traditional Muay Lao outfit, but its likely to get cold if you’re going to any night parties.

Many of you may also remember the recent blood supermoon, so this may be a good year to take a frog costume for Kop Kin Deuane, “The Frog Eating the Moon.” A bloody moon is optional, of course. You could also use a frog or toad mask as a start for the costume of the heroic Toad King Khankhaak. Another relatively easy costume to consider would be that of the heroine Keo Na Ma, translated at various times as Dog-faced Keo or Horse-faced Keo, who fought against any number of villains including the Nyak armies.

Ultimately, Lao Halloween costumes ought to be limited only by your imagination. Combine them with creatures and characters from other traditions and see what happens. What does a Lao Frankenstein’s Monster look like, or a vampire Kinnaly? There are great ways to do a Lao Medusa or mummy. Perhaps you can go as the Haunted Thip Khao, a Laobot, or the winged horse Mankiab.

What are some of your ideas for great costumes you’d like to see this year or in the future?