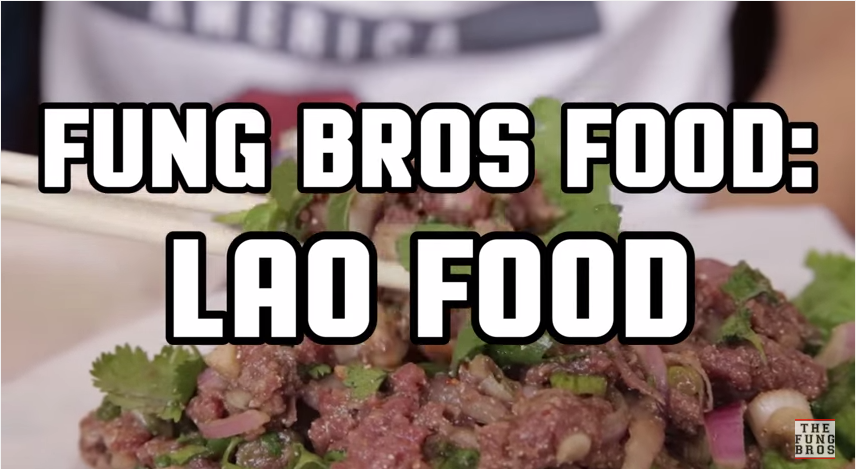 My brother recently tagged me in a video about Lao food posted by the infamous FUNG BROS., a YouTube duo who produce hilarious videos highlighting Asian American themes, especially food. They’re pretty popular, too, netting over 900,000 subscribers on YouTube. My first thoughts were, “Holy crap, the FUNG BROS. made a video about Lao food?! Maybe the #laofoodmovement is a real thing.”

When I watched the video, I was not only sorely disappointed, but annoyed and offended by a lot of the misinformation. As a proud Lao American, I know the Lao community does not get the same exposure that other communities receive. So when a chance like this comes along, sending the right message is not only important, but necessary. The Fung Bros. not only missed an opportunity to showcase the flavors and combinations that make Lao food unique, but they failed to provide correct information on the Lao community, leading me to think WTFUNG?! Here are 5 problematic moments in the video:

Not only is Ka Prao Fried Rice a Thai dish, but if you look closely, the thumbnail on the left is actually Nem Khao, a completely different dish with Lao origins. Once again, Lao is NOT Thai. #doublefail

Most of you are probably thinking, “But most Thai restaurants are actually owned by Lao people!” Yes, this is probably true. But going to a restaurant that brands itself as “Thai” and not “Thai/Lao” or “Lao” almost guarantees that you will get mostly Thai dishes with water-downed Lao dishes at best. And indeed, most of the dishes featured in the video are more Thai than they are Lao. Crying tiger? Green curry? Kra pao fried rice? Thai dishes. The desserts? All Thai. Granted, Lao people do eat these dishes, but Lao food isn’t just Thai food with added fermented fish. There are plenty other options that are more traditional and unique to Lao culture like gang nor mai, or lam, mok pa, and different types of jaew, that aren’t featured at all. Even their choice of noodle dish – Lao pho – is a miss; khao piak or khao poon would have been better options to showcase. They also fail to acknowledge how important sticky rice is the Lao people and how it sets us apart from a lot of other cultures, including Thai culture. Aside from padaek, which is actually mentioned multiple times throughout the video, sticky rice is probably the essence of Lao cooking and Lao life.

The in-house Lao expert in the video opens by saying, “traditionally, we pronounce it Lao-shun, not Lay-o-shun,” which sent a lot of shocks throughout Facebook and YouTube. So what’s the correct way to say it? Well, the confusion probably comes from the term itself. “Laotian” is an English term Americans derived from the French term, “laotien” or “laotienne,” meaning “of or originating from Laos.” The French pronunciation sounds more like the “Lao-shun” mentioned in the video, while the English pronunciation is “Lay-o-shun.”

Many who are ethnically Lao prefer to use “Lao” as their identifier instead of Laotian and to erase the use of the Westernized/colonialist term. “Lao” is also the term Lao people use in the Lao language. However, Laotian is still widely used in mainstream because it can refer to any of the diverse ethnic groups originating from Laos (be it Lao, Hmong, Tai Dam, Lue, etc). Again, this is because it derived from the French word meaning “of or originating from Laos.”

I have to admit, this is a hard question to answer, even for someone who has studied both languages. The answers they gave in the video, though, left me squirming in my seat. “Lao is less formal,” “Thai people enunciate more,” and “Thai people say thank you after everything.” These statements really just make Lao people sound like we are an uncivilized people who slur our words, and don’t like to say thank you. Actually, the Lao language is a beautiful language with a long literary history. For those who are interested, here’s a great breakdown on the difference between the two languages.

My first reaction was, “Wait, WTF?! Where the heck did they get this from??” Lao people are known for their ridiculously long last names. Remember Kahn Souphanousinphone from King of Hill? Granted, there may have been folks who came from the country side and had to fill out paperwork for the first time during the immigration process. These groups most likely had to invent their last name if they didn’t have one. But, this is more of an exception rather than a general rule. Other people most likely had to change their names to stick together with relatives or wanted a more simplified name to assimilate into American culture. After all, “Hsu” is clearly less intimidating and easier to pronounce than, let’s say, “Chanthaphasouk.”

While it may be hard to find other Lao people, particularly in Southern California, this makes it sound like the Lao are some ancient culture on the brink of extinction. Actually, California boasts the largest Lao population in the U.S. with about 55,000 Lao in the state alone. In total, there are more than 200,000 Lao living in America, with diaspora in various countries around the world. Laos as a country has a population of 6.77 million, with a couple more million living in Northeastern Thailand. We may be a small community compared to other Asian countries, but we are definitely #laostrong.

“But it’s just a fun video! Chill! Besides, at least Lao food is being represented.” I hear you. I also get super excited whenever folks Laopresent. But keep in mind, this may be the ONLY video that people see about Lao food and/or Lao people, and that’s why it’s so important to get it right. How come most people in America don’t know about Laos? Because we’re not adequately taking advantage of opportunities such as this one to tell our stories – stories that reflect our unique culture, experiences, and our constantly changing community.

Fung Bros., thanks for the exposure. This is definitely a good start and it’s sparked a lot of dialogue and conversation on Lao identity. If you’re interested in indulging in more authentic Lao cuisine, sipping on some award-winning Beerlao, and talking Lao culture, hit me up. I’ll make sure to take you to my favorite Lao restaurant in Orange County, not too far from the 626.