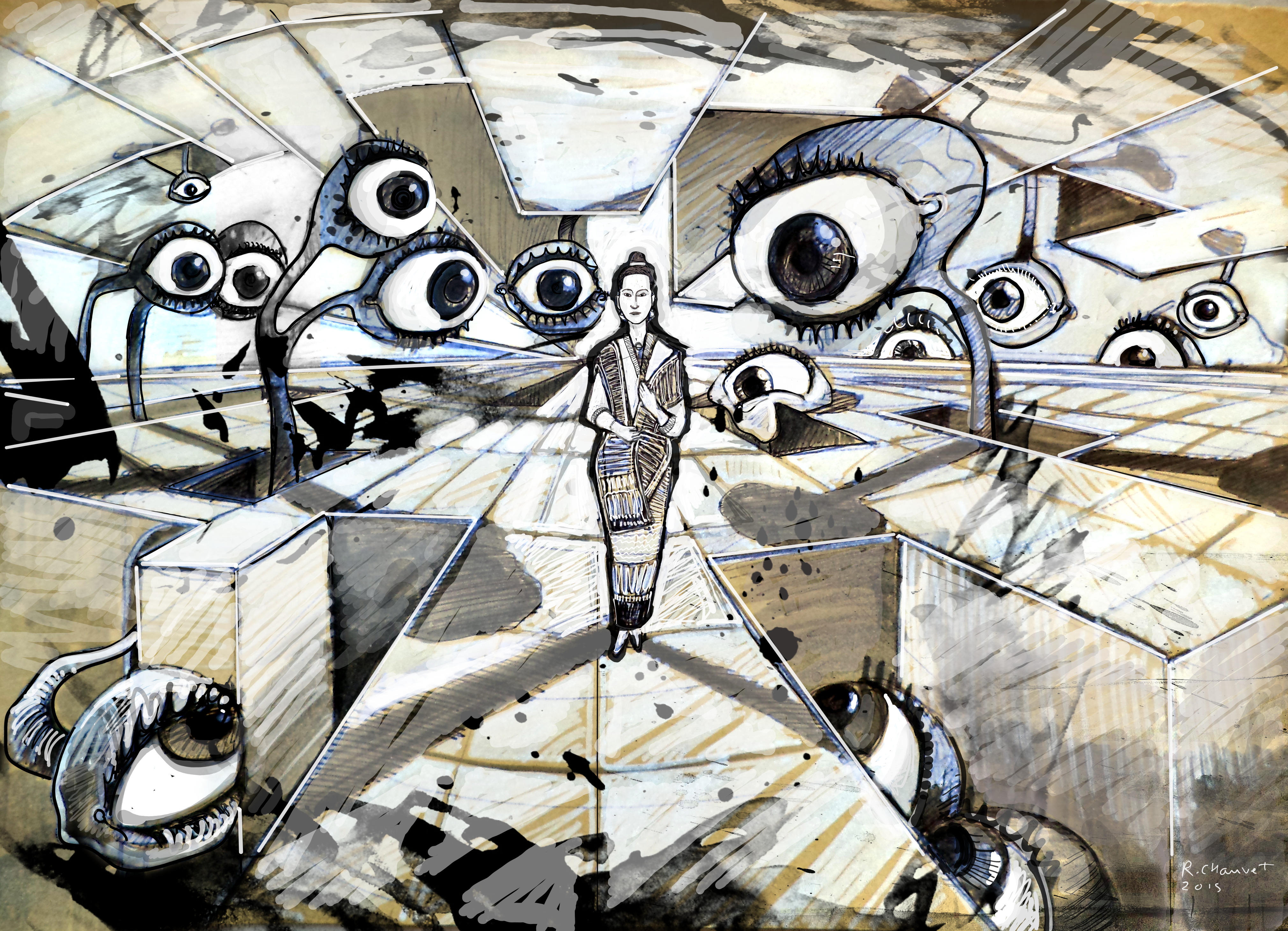 Lao science fiction is making its mark! This weekend in Bloomington, award-winning Lao American playwright and poet Saymoukda Vongsay will be one of the guests of honor at the MarsCon convention, presenting “Kung Fu Zombies vs. Shaman Warrior.”

In her presentation, she will discuss the often taboo subject of mental illness. She notes that for many communities it is often explained as demonic possession. Beliefs like this stem from centuries of folklore about demons, ghosts, monsters, and witch doctors. “I want to talk specifically about refugee communities and the second installment from my Kung Fu Zombieverse anthology of stage works,” Vongsay said. It’s an important subject. There are reports that for many years, there have been only two psychiatrists in all of Laos.

The MarsCon theme this year is Heroes & Wizards & Fae, Oh, My!

Vongsay’s work has been published nationwide. Her play, Kung Fu Zombies vs Cannibals, was produced by Mu Performing Arts and named Best Production of 2013 by L’etoile Magazine. She is the inaugural recipient of the 2010 Alfred C. Carey Prize in Spoken Word Poetry, the 2012 and 2011 Jerome Foundation/Mu Performing Arts Fellowship in Theater, and a 2012 Storytelling Fellowship from the MN State Arts Boards’ Folk and Traditional Arts Grant.

Among the other guests of honor who will be joining her at MarsCon are action actress Spice Williams-Crosby, actress Antoinette Bower, artist Robert Odegard, the author Lyda Morehouse, and game designer Eric Wile.

First held in 1999, MarsCon is “a fan-run science fiction convention for all ages held every March in the Twin Cities area.” Activities include panel discussions, parties, music, presentations, an art show, films, science exhibits, dealers, a charity auction, and masquerade.

In Minnesota, the science fiction convention community has a history of being deeply supportive of emerging Lao and Hmong writers, with several conventions regularly committing programming slots to them throughout the years to share their work with attendees. Sometimes they’ve drawn only a handful of con-goers, and other times they’ve packed the room, particularly when talking about ghosts from the old country.

In addition to Saymoukda Vongsay and Bryan Thao Worra, Hmong writers including May Lee Yang, Peter Yang and Pacyinz Lyfoung have presented their poetry and short stories at these events. Events such as San Diego Comic Con and the H.P. Lovecraft Film Festival-Los Angeles, have also had panels featuring Lao writers in recent years.

Overseas, director Mattie Do has been actively working on her latest projects, including Nong Hak, the follow-up to her ground-breaking indie horror hit, Chanthaly.  Thanks to generous fan support, Nong Hak will also have one of the biggest budgets for a Lao film to date, so expectations are high.

On his tumblr account at artofnor.tumblr.com, children’s book author and illustrator Nor Sanavongsay has been teasing a number of Kinnaly images for a new project he and Bryan Thao Worra are announcing in April. In 2014 the two won the Strange Horizons Reader’s Choice award for Poetry together for the poem and illustration “Full Metal Hanuman.”

“I think people will be really excited by this,” said Sanavongsay. “There’s not a lot of Lao science fiction out there right now, but we’ve been fortunate that what is out there tends to get noticed, and we’ve had many positive requests for more.”

Bryan Thao Worra noted one early example of Lao science fiction from the 20th century: “In a conversation I once had with the scholar Peter Koret, he mentioned an old short story by Viset Savaengseuksa in a book called Lam Xe Sa-Eun. It stood out to him as one of the only ones of that era that considered an advanced, futuristic Lao society. I’m hoping over time we’ll find other stories that might have been overlooked or were less well-known in their time.”

In addition to the preparations for the Lao American symposium Our Shared Journeys in Minneapolis this April, Bryan Thao Worra was recently announced as a guest of honor at CONvergence this July. In addition to reading from his latest book of speculative poetry, DEMONSTRA, he’ll be convening a 10th year anniversary poetry open mic, Giant Lizard Theater, during the convention.

CONvergence will be held in July in Bloomington at the DoubleTree Hotel by Hilton Hotel. Their theme this year is DoublePlusGood, exploring dystopias and how humans envisioned terrible societies in the past, as well as the present. Where will we go next? Why are humans so attracted to such stories? Bryan Thao Worra will be trying to answer some of those questions from a Lao perspective.

“Dystopias aren’t something you see depicted in much of Lao literature, but if you take a close look at Lao history you’ll see that Lao writers should actually have a LOT to contribute to the genre,” said Thao Worra.

He’ll also be bringing presentations on Lao mythological entities and a discussion on future opportunities for Lao speculative literature, including samples from his ongoing Laomagination project and his controversial Laopocalypse series. In 2014, he received the Elgin Book of the Year Award from the Science Fiction Poetry Association for his collection DEMONSTRA from Innsmouth Free Press.

Will other Lao writers add their voices to science fiction soon? Many have high expectations for Krysada Panusith Phounsiri, who is debuting his poetry collection Dance Among Elephants this year from Sahtu Press. He holds a major in Astrophysics and a minor in Creative Writing. That seems a powerful combination for some extraordinary ideas.

Thao Worra has been speaking at length about the importance of refugee communities such as the Lao engaging with speculative literature. In a recent blog he noted, “A refugee community that doesn’t have the ability to see a future for itself becomes fixated on its past and ends up aimless. Without creating a body of science fiction, empowering ourselves to imagine a future we are present in, we risk becoming merely the janitors of carnage. Survivors whose only duty is to sweep up the last memories for a rubbish bin, and then turn out the lights and lock the door on our moment in history.”

This April, the SatJaDham Lao Literary Project marks 20 years since its founding. Many of the original core participants have gone on to remarkable accomplishments for having had literature in their lives in their twenties, but only a handful of them are still writing actively today. However, it’s also clear, when Lao stay in the arts, they can often go far in their field.