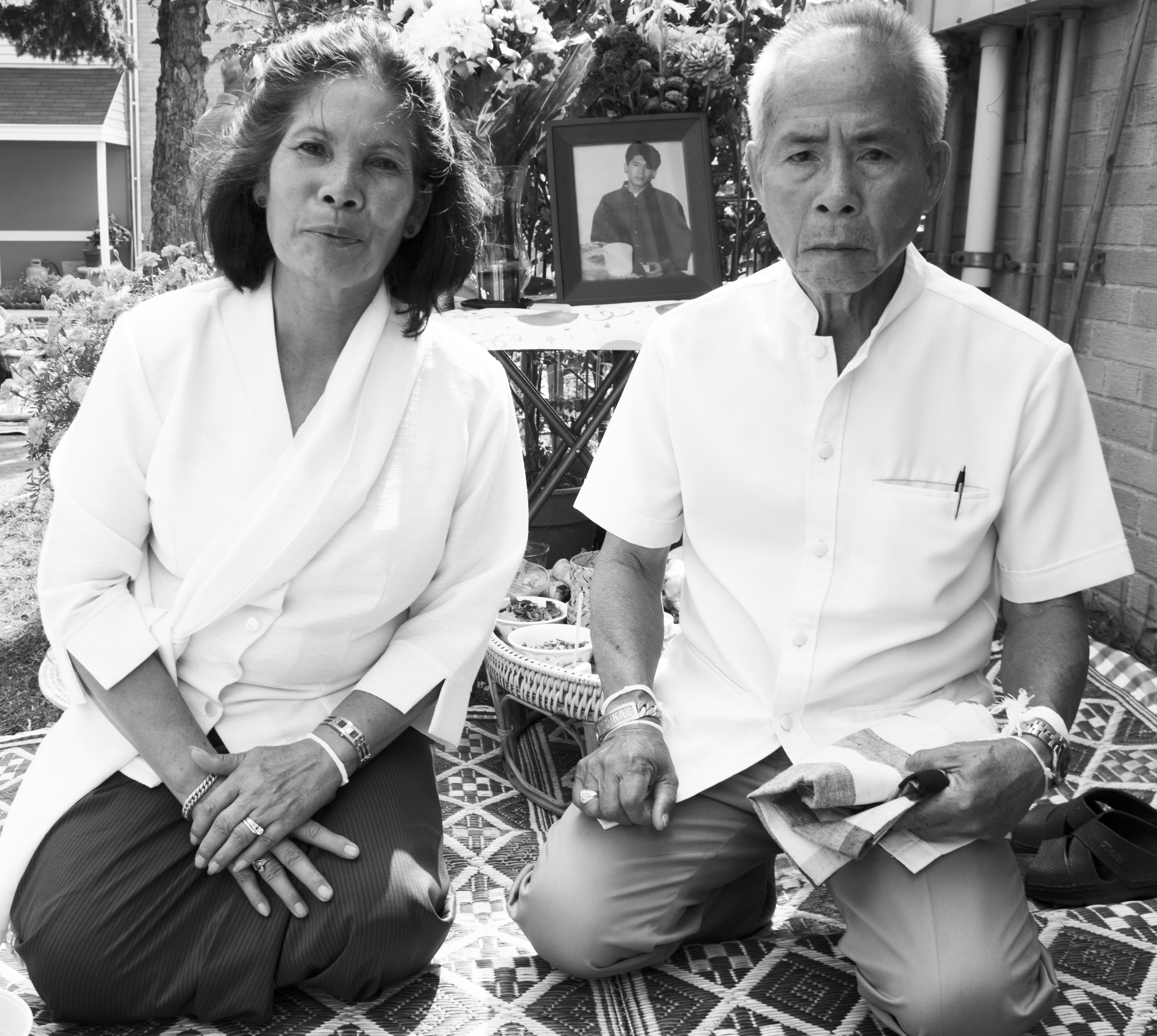 In the cozy dim-lit townhome of Mr. Phouxay and Mrs. Keo Phathavong, it’s surrounded by mismatched colors of decorative pieces from the 1980s and green house plants hovering over the windows for spurts of sunshine. “The ‘lucky’ plant, is what they’re called”, said Keo. The couple are regulars at the nearby Lao Assistance Center of Minnesota office, where they huddle for chit chat with elders during the day and look for help when they need translation for their bulk mail.

2011 was the year that changed everything for the Phanthavongs. Their son, Anousone Phanthavong, would make national headline news. Not because of the life he had lived, but from a hit-and-run incident that led to his death by the wife of a famous Vikings football player. This past year, they honored the son they had tragically lost, at the third anniversary of his death. Buddhist monks gave their blessings to the family. Hundreds of Lao elders gathered in the intimate Lao community of Harrison neighborhood in North Minneapolis to pay their respects. Small children released white balloons; to free spirits in the sky.

Tell me about your journey to America.

We made the journey in 1980. It was California first and then Minnesota. My husband crossed the Mekong from Thakhek, Laos to Thailand. I followed with my three children. Our family was briefly arrested before we left for Napho. My father adored Anousone Phanthavong the most and he stayed behind to help his grandfather live his last days there. He later came at the age of 17.

How has it been living in Minneapolis?

It was hard at first. There was barely enough to eat. We don’t speak English well, and now that our children are all grown up, they went to school and help us when they can, so it’s a bit easier. We’re in Harrison Neighborhood now, where all the elders and their kids who are still here take care of each other.

My husband and I don’t make more than $1,000 a month. We depended on Anousone to take care of us, because he didn’t have a family yet, like the rest of the children. But now that he’s been gone for three years, we’ve been trying to take care of ourselves on our own.

Describe the day you found out about the news of Anousone’s death.

My husband and I were moving that day. We wanted to move closer to where all the Lao elders lived in huan luang (subsidized public housing in Harrison neighborhood). Our things were all in boxes. I remember getting off the phone with Anousone because he was coming to help us the next day, but he said he needed to stop by the restaurant he worked at.

The night came. Then a police officer knocked on our door to tell us what happened. Next thing I did was a blur. I kept running up and down the stairs, till I ran out of breath. I didn’t know what to think, what to do.

We heard that people were gossiping and even her (Amy Senser) lawyer tried to use Anousone’s past to keep her free. That’s not fair to do to someone who is already dead. You know what had hurt me the most as a mother? Not that she hit my son, but that she had left my son there. The act of leaving my son to die was what made me cry every day during that time.

What did you do after the case was closed?

After the trial was over, we went back to Laos to visit. In Laos, we wanted to see how it was to live comfortably, but then we couldn’t seem to be happy. We would miss our children in the states. That’s how you are as a mother. Your children are your first thoughts.

Since the trial, Amy’s best friend used to stop by with food and to see how we’re doing. At first, my children wouldn’t allow it; because they were furious. But I had to remind them, “It’s okay if they want to help. It won’t hurt us”.

How has life been since then?

We’re still living. We didn’t read or watch the news then or today about it. Our children told us not to.

We lost a son who we depended on a lot. Some of our children lost their jobs, because they had to help support us, interpret for us and help us get to the courthouse. Since the day of the funeral, one of my grandsons couldn’t stop having nightmares about his Uncle Anousone. The dreams took over his life. He would say he kept hearing voices. He had to be hospitalized. He’s still hospitalized to this day.

Reflecting on then and now, is America what you thought it would be?

Here in America, we’re not together as much as a family. Sometimes I just want to go back to Laos, because Lao people live together and they live together as a community. They help and care for each other, unconditionally. But then I’ll be reminded that all my children are here.

America is our home. We miss Laos on most days, but this is home for us. When we stay in Laos, we think about our children. When we come here, we think about Laos and how much more simple life could be. But we left everything back then. We have no home, no life in Laos to go back to. This is our life now as an elderly couple in Minneapolis.