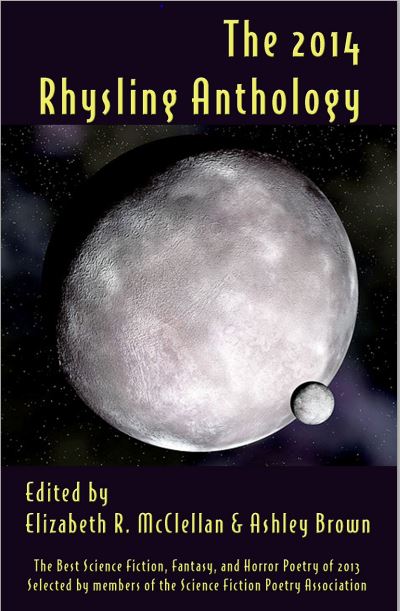 From our friends at the Science Fiction Poetry Association:

The 2014 Rhysling Awards, hosted by Elizabeth R. McClellan and the Science Fiction Poetry Association, honoring the best speculative poetry of 2013, will be held in Nashville, Tennessee on Friday, December 12, 2014 at 7:00 P.M. at the Goddess and the Moon, 603 8th Avenue South, Nashville, Tennessee, as well as being livestreamed online.

A speculative poetry-themed open mic will follow, open to any interested poets. The Rhysling Awards honor short and long form works in science fiction, fantasy, horror and slipstream poetry. The 2014 Rhysling Anthology, the annual collection of nominated works, will be publicly released at the event. Copies will be available for sale, as well as memberships to the SFPA.

Event details, updates and information are available at http://tinyurl.com/2014RA : RSVPs are appreciated, but not required.

The Rhysling Award nominations and selections are made by the members of the Science Fiction Poetry Association, founded in 1978 to bring together poets and readers interested in science fiction and speculative poetry. The Rhysling Award honors poetry in two categories: short poems of 1 to 49 lines and long poems of 50 lines or longer.

The annual award is given to one (1) work in each category, and the second and third place works are also honored. The list of the 2014 nominees is available at www.sfpoetry.com/ra/rhyscand.html.

The Rhyslings are considered in the speculative fiction field to be the equivalent in poetry of the Nebula and other awards given by the Science Fiction & Fantasy Writers of America for “prose” work: achievement awards given to poets by the writing peers of their own field of literature.